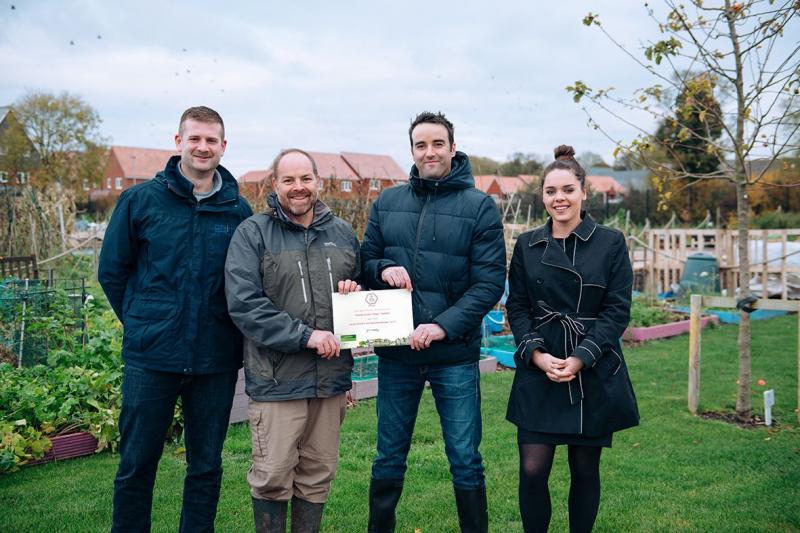 RHS Britain in Bloom is a nationwide gardening competition and the largest horticultural campaign in the United Kingdom. Each year more than 1,600 communities across the country enter regional competitions, with 80 communities selected to enter the national finals.

Tadpole Garden Village was entered by local residents and neighbours Peter Welsh and Stu Olden. Over eight months, Stu and Peter worked closely together to brighten up the village, update the gardens with new planters donated by Crest Nicholson, and encourage local wildlife to the area, ahead of the judges visit in August.

As first-time entrants, Peter and Stu are confident Tadpole Garden Village can take the top prize next year and have already begun preparations for a new vegetable patch. To support their efforts, Crest Nicholson will be making a donation of spring bulbs as well as promoting their upcoming community litter picking session on the community app.

Peter Welsh, Tadpole Garden Village resident and award-winner, said: “We love living in Tadpole Garden Village and saw the Britain in Bloom competition as another way to bring the community together. What started as a project for Stu and I now has more than 80 residents interested in helping us keep the village’s gardens looking pristine. We are hoping this Silver award will encourage even more people to get involved.”

Andrew Dobson, Managing Director of Crest Nicholson Strategic Projects, said: “As a developer, we understand the important role landscaping and mature gardens can play in creating a sense of community. When Peter and Stuart approached us about entering Tadpole Garden Village in the Britain in Bloom competition, we were more than happy to help. Not only does this demonstrate the pride residents have in their community, but it’s a great way to engage more residents and introduce them to wildlife in the local area.

“To have the work that Peter, Stuart and Crest Nicholson have done recognised by the Royal Horticultural Society with the Silver Award is just another testament to the thriving community we have created in Swindon.”

Tadpole Garden Village is a vibrant community that will comprise 1,855 homes on completion. Designed with Crest Nicholson’s Garden Village Principles in mind, the development includes a primary school, secondary school, local centre and community centre as well as 16 areas of play, 40 allotments and an abundance of high-quality green spaces. More than 60% of the site is dedicated open space for the community to enjoy including the village’s 60-acre Nature Park.

A range of one and two bedroom apartments and three to five bedroom homes are available to buy, priced from £215,000 to £600,000. For more information visit www.crestnicholson.com/developments/tadpole-garden-village.