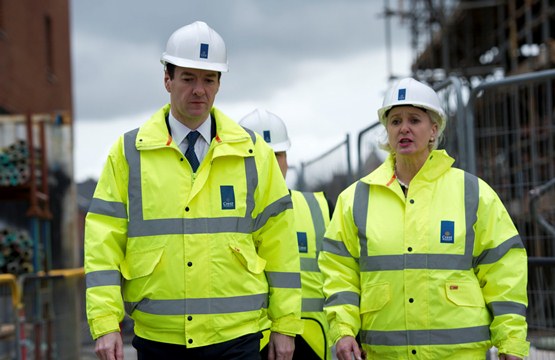 Southampton house builder Crest Nicholson today said it will bring forward the next phase of development at Centenary Quay by a year and build 280 new homes  - 128 of them in the next year – following government reforms to stamp duty.

New analysis by the company also revealed today that the reforms will save buyers in Southampton on average over £1,660 per transaction and increase demand for new homes. In addition, since 2013 44% of sales at Centenary Quay were made through the Government’s Help to Buy scheme and a further 102 apartments were sold for Build to Rent.

The news comes as Chancellor of the Exchequer George Osborne met first-time buyer Stephen Bennett at Crest Nicholson’s Centenary Quay development today. The media officer from Southampton is buying his first home through Help to Buy and following the government’s reforms will save £980 in tax on his property.

“This is great news for Southampton – not only are Crest Nicholson building more homes quicker but buyers will also see a real cash saving when they purchase a house.

"Stamp duty was one of the worst designed taxes and acted as a brake on aspiration for those who wanted to get on or move up the housing ladder. The new system means there will be tax cut for 98% of homebuyers who pay stamp duty.

“Together with the government’s Help to Buy scheme, which has helped more than 10,000 people in the South-East and over 71,000 people across the country buy their new home, we’re taking action to help hard-working taxpayers achieve their goals. It’s a key part of our long term economic plan.”

“The recent changes to the stamp duty system are extremely welcome. These reforms will undoubtedly boost activity in the housing market, re-stimulating building rates and enable us to drive the rate of sales back to pre-recessionary levels.  Last year alone we were able to facilitate 571 new home purchases through government backed incentive schemes such as Help to Buy, and now with the addition of Stamp Duty reform we remain committed to our target of building in excess of 3,000 new homes in the UK in 2015.

“This will in turn support further job creation and have a positive overall impact on the entire economy. Most importantly though, the impact of changes to stamp duty will remove a lot of uncertainty for consumers over the coming months, helping to solve the affordability challenge so many purchasers are facing. This is particularly true for first time buyers struggling to get on the housing ladder. Of all our Help to Buy sales, a massive 72% were to first time buyers, and we hope to see a similar impact from Stamp Duty reforms.”

"HBF has long called for the abolition of the stamp duty slab system that caused distortions in the market, penalised buyers and influenced what builders could build. The slab system also did wider economic damage because it impeded labour mobility. Whilst we need to study the overall impact of the proposed changes the new system, which will benefit 98% of home buyers, is fairer and more practical and will help stimulate activity in the housing market, as well as helping to boost the production of new homes.”

While visiting the housing development the Chancellor also met 3rd year apprentice Richard Smith, a carpenter at the construction site, as well as first year apprentices Callum Ray and Jack Lewis who both work as electricians. Apprentices make up 10% of Crest Nicholson’s entire workforce, and investing in their future training and skills by providing practical projects and experience is a key priority for the company.

Last week the Chancellor announced that the Government is abolishing the residential slab system and that from 4 December each tax rate will only apply to the part of the property price that falls within that band – cutting stamp duty for 98% of people who pay it.