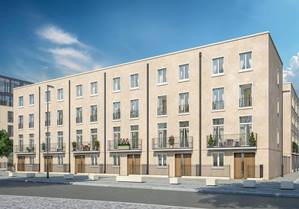 As more and more student accommodation enters the market in Bath added importance has been placed on the city’s only major new property development.

The burgeoning student population, which is estimated to hit the 20,000 mark by 2020, has resulted in a raft of office conversions, new builds and change of use of old buildings and schools in order to accommodate the rising numbers of those studying at the city’s two universities.

The rise in student numbers has also placed additional pressure on the more traditional digs, while housing stock in areas not usually used by students are now being occupied by those studying for a degree.

Such a proliferation of all the new student homes has therefore increased the significance of any new development for private purchase or investment, especially for those wanting a new property in close proximity to the city-centre.

It’s why Crest Nicholson’s Bath Riverside is now seen as a major component in the city’s plans to provide homes for those looking to move to the city or for current residents wanting a change of scene.

But it’s not just those looking for somewhere to live that are feeling the pinch. Businesses in Bath are also being squeezed by the fast increasing demand as sites traditionally used by small artisan employers are being snapped up all over the city for conversion.

Mary Timlin, sales and marketing director at Crest Nicholson said: “It’s great news that Bath is thriving and continues to pull in the crowds from all walks of life.

“What is apparent is the importance of Bath Riverside when it comes to providing new homes for those wanting to move close to the city centre and the significance of regenerating a site that was left derelict for many years.

“This has helped ease the pressure on the need for new housing stock across the region as the Government pushes for an increase in the number of new build properties.”

The significance of Bath Riverside and why it’s proved so attractive is, according to Mary, the mix of properties being built, which ranges from one-bedroom apartments to four-bedroom riverside villas.

It is also providing vital retail space for a range of businesses looking to set up shop close to the city centre which is a short walk along the pedestrian tow path.

Mary added: “The development is ticking a lot of boxes from the city’s housing needs.

“Buyers include those moving to the city for work as well as those who have lived here already.

“It has also attracted a number of buyers who have children studying at each university. It provides a place to live for their son or daughter and once they’ve finished their studies, allows the owner to rent it out or sell on once they’ve gone.

“What has been achieved here at Bath Riverside is a great example of using space to fit the needs of a modern, forward thinking city.

“For those that haven’t been here since work began I suggest they pop down to take a look around and see for themselves why this development is being heralded as one of the best examples of inner-city regeneration anywhere in the country.”

For further information please call 01225 463 517 or visit www.crestnicholson.com/bathriverside Back
Our Business
Careers
Press Room
Sustainability
Charitable Giving
Community Engagement
We use cookies
This website utilises cookies in order to provide analysis of our visitor data, to improve our website, show personalised content and to give you the best experience. For more information, click here.
Accept