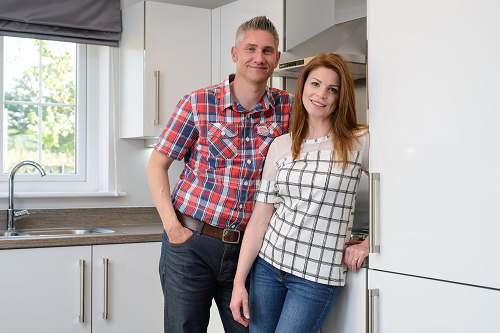 The 44-year-old Business Development Manager says he instantly knew he wanted to purchase his three bedroom detached house at Crest Nicholson’s Kilnwood Vale development in West Sussex the very moment the sales team showed him the plans.
“I wanted it straight away,” he recalled. “I really liked the large living space - I’ve always wanted a large front room living area.
“It had a huge en suite bathroom running along the back of the house and we really liked the location. It just seemed perfect for us!”
Kilnwood Vale is a collection of new homes in Faygate, West Sussex. The flourishing new community of traditionally designed two, three and four bedroom homes is surrounded by open countryside.

Scott and long-term partner Katie Farrow, 30, have been together for four years and were previously living together in a two bedroom house before deciding one day that it was time to move to a bigger property.

He said: “I was glad to find somewhere that we could just move into without having to do lots of work. I’ve done that in the past but it’s tough. I work reasonably long hours now so that’s one of the benefits of buying a new build: everything’s ready for us to move straight in.
“Although Katie already has plans to create a feature wall at the back of the house! I’m just happy to leave everything as it is for a while.”
Scott - who is now renting out his previous address in Worth, Crawley - said as well as the open plan nature of the property, both he and Katie were attracted to the plot’s large kitchen.

He went on: “Katie really liked it. She had always wanted a bigger kitchen and now we have it. The one we’ve been living with at our last property was so tiny so we’re both looking forward to doing more cooking in a much more relaxed environment.”
Scott and secondary school teacher Katie’s kitchen has room for a table or breakfast bar, while their main dining area forms part of their vast front room. It all means the pair will have plenty of space as their family grows.
Scott added: “Katie and I both want to have children and from that point of view this house made perfect sense.
“There are plans for a school and new shops on the development which is good news for the area. We’re hoping it gets bigger and better as the years go by and we’re looking forward to starting our life together here.”