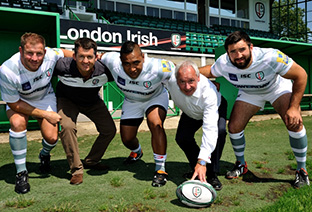 London Irish Rugby Club and Crest Nicholson have agreed a four year sponsorship agreement which also sees the recently listed housebuilder become the club’s partner in the re-development of its Sunbury training ground.

In tandem with the sponsorship agreement, Crest Nicholson and London Irish will collaborate on an extensive range of local and community focused initiatives around a number of Crest Nicholson’s major new development projects in Sunbury, Reading and Swindon, all of which are located in the club’s Thames Valley heartland.

Crest Nicholson is a leading developer of sustainable communities, dedicated to excellence in design and innovation, sustainability and customer service. Over the coming years, the Group is set to deliver around 10,000 high-quality and much needed new homes across its development sites in the Southern half of England, including more than 200 homes in Sunbury, starting in Autumn 2014 with first completions in Spring 2015.

Stephen Stone, Chief Executive of Crest Nicholson, said: “We have been working with London Irish on the redevelopment proposals for the training ground for a number of months now, and our sponsorship of the team for the 2013-2017 seasons makes sense for a number of reasons. Not only are we keen to maintain our working partnership, but the club also has a significant following in a number of areas where we are launching major developments. Engaging with and supporting the local community is a key priority for us, and we are keen to ensure that we continue to have a positive impact on the local area, not only through our sponsorship but also with the many local initiatives we are planning on delivering with London Irish over the coming months.”

The Crest Nicholson logo will appear on the front of the London Irish jersey in all Aviva Premiership, LV=Cup and Amlin Challenge Cup fixtures.

London Irish Commercial Director, Jim O’Toole, added: “London Irish already has an excellent working relationship with Crest Nicholson and we are looking forward to implementing a meticulously planned marketing partnership that has been moulded around the Company’s very specific business objectives.”