About us > Press room > Bolnore Blooms for Judges 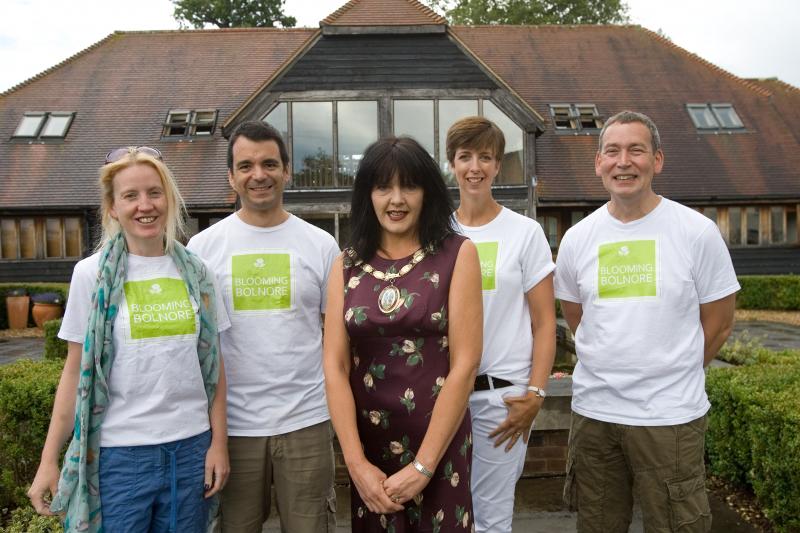 Bolnore Village’s bid to be crowned ‘best urban garden’ in the South and South East category of Britain in Bloom moved one step forward this week as two RHS judges visited the development. Having travelled by train from London and with a schedule that involved flying off to Scotland after, the RHS’s Jeff Bates and Nigel Bishop visited

Bolnore Village mid-way through a ten day judging spectacular as they travelled the length and breadth of Britain. Also in attendance was the newly appointed mayor of Haywards Heath, Councillor Sandy Ellis, who is also the chair of Haywards Heath in Bloom

The bid kicked off with the sumptuous lunch before Simon Lanaway, from Bolnore Village, delivered a presentation to the judges. Simon explained that the entire project had brought the community together, and initiatives have included running sessions to create hanging baskets that the residents can then hang outside their homes throughout the development.

Organised by the Royal Horticultural Society, the national competition is one of Europe’s largest horticultural campaigns and enables local communities to show off their efforts in environmental responsibility, community participation and horticultural achievements. Bolnore has been shortlisted as one of 80 national finalists from 2,000 entries, after winning gold at last year’s South and South East in Bloom - the regional competition to qualify for the national ‘Britain in Bloom’ contest.

As the only place in Sussex to be selected as a finalist for the award, the gardening initiatives at Bolnore Village have become as a focal point of both the local and wider community.

Simon Lanaway, Bolnore Village: ‘We’ve only been part of Britain in Bloom for two years, so we’re delighted to be representing the South East in the ‘urban garden’ category. We’re so grateful for the overwhelming support from the village and everyone across Haywards Heath.”

Prices at Bolnore Village start from £199,950 for a two bedroom apartment and from £299,950 for a three bedroom home. For further information, please contact the Crest Nicholson Sales and Marketing Suite on 0870 750 8401, which is open daily from 10am to 5pm. Alternatively, visit the website www.crestnicholson.com/bolnorevillage.