Best in Britain and best in Bristol - Harbourside's got the lot 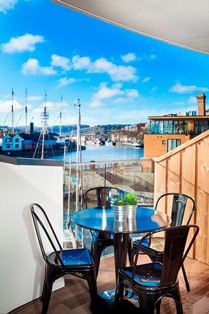 House hunters picking off one of the few remaining three-bedroom apartments at Crest Nicholson’s Harbourside development will be making themselves comfortable in the best location in the country!

That’s according to a recent survey which voted Bristol the best place to live in Britain.

The report highlighted Harbourside as the city’s new jewel in the crown, ticking all the boxes for value for money, waterside living with every modern convenience on the doorstep.

Crest Nicholson sales and marketing director Susan Young said: “The Sunday Times survey pinpointed the revitalised Harbourside as the place to be in Bristol, describing the dockside development as a driving force behind Bristol’s economic recovery and source of much of the city’s creative energy.”

According to the latest figures Bristol’s economic growth will outstrip the national average by 2016, further cementing the city’s already enviable reputation as the best place to live in Britain.

“The report recognises the extent to which Harbourside has been transformed from a post-industrial wasteland into Bristol’s leading hipster hangout. But it’s not just students and twenty-somethings that are moving in to the development.

“It also points out how increasing numbers of over 50s are trading in large suburban family homes and choosing a smaller inner-city apartment rather than the traditional out of town bungalow.”

Highlighting Harbourside’s many new bars, restaurants it also ranked the Brunel Mile – the traffic-free cycle and pedestrian route linking the area with Temple Meads – as another outstanding factor in the city’s success story and is set for completion at Harbourside’s last phase called Invicta.

Susan said: “If Bristol’s the place to be then Harbourside has got the lot.”

The last phase at the development, which is called Invicta, includes a number of three-bedroom properties which form the prow of the phase and benefits from a premium specification unlike anything else available in the city.

Affording some of the best views around, those who want to live in the lap of luxury while enjoying the waterside panorama, including Brunel’s ss Great Britain, will be hard pushed to find anything else of similar quality in a similar price range.

Susan added: “2014 will see the final phases in the regeneration of Bristol’s Harbourside, marking the end of an ambitious transformation programme first mooted back in 1976 when the area was largely derelict.

“We are thrilled the recognition Harbourside has received and the role it has played in shaping and inspiring the transformation.

“The regeneration of the docks and area formerly known as Canon’s Marsh – one of the biggest inner-city regeneration projects in the UK – has re-defined what people think of as the heart of Bristol, shifting the emphasis west from the old city-centre and opening up an entire new quarter.

“Canon’s Marsh had been abandoned and left semi derelict since the last war, criss-crossed with old railtracks, scarred by derelict gas works and mainly used as a coach and car park.

“We are immensely proud of what has been achieved providing a place where people can now live, work, rest and play.”

Located on Canons Way just off Anchor Road, Invicta is spread over five floors and the new marketing suite is open every day from 10am to 5pm.

For further information please visit http://www.crestnicholson.com/harbourside/ or call 0117 908 8888. Back
Our Business
Careers
Press Room
Sustainability
Charitable Giving
Community Engagement
We use cookies
This website utilises cookies in order to provide analysis of our visitor data, to improve our website, show personalised content and to give you the best experience. For more information, click here.
Accept