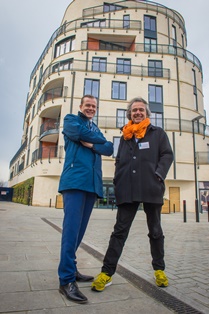 More than 70 people involved in what is regarded as the most important new home development in Bath got together at a special event to mark the completion of one of the most striking new buildings the world heritage city has seen for at least half a century.

Taking place in the Royal View building at Bath Riverside, Scott Black, managing director at Crest Nicholson Regeneration addressed the assembled guests and stakeholders, most of whom have played a key role in bringing to fruition this important development.

With everyone gathered in the spectacular central atrium, Scott not only praised the build team for sticking to the tight schedule on what is a tricky site but paid tribute to the B&NES planners who, having worked closely with the Crest Nicholson team, bought into the vision to regenerate what was an eyesore in the heart of the city.

He also highlighted the importance of the development which is bringing a mix of over 2,000 affordable, social, private residential and private rented sector (PRS) properties to Bath.

With work continuing on the new building, called Sovereign Point, sales and interest in Bath Riverside is set to remain high, particularly with those keen to live within close walking distance of the city centre and next to the River Avon.

For further information on Bath Riverside please call 01225 463517 or visit www.bathriverside.co.uk Back
Our Business
Careers
Press Room
Sustainability
Charitable Giving
Community Engagement
We use cookies
This website utilises cookies in order to provide analysis of our visitor data, to improve our website, show personalised content and to give you the best experience. For more information, click here.
Only allow necessary Accept all cookies