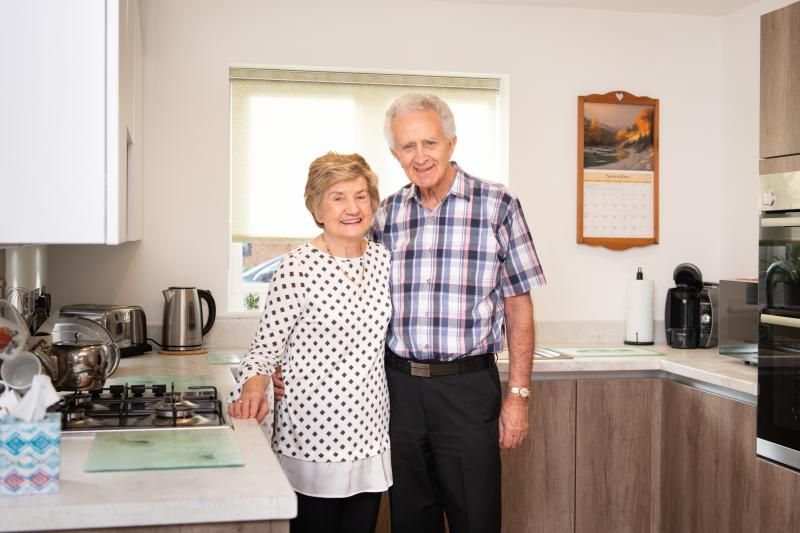 Doreen and Robert Shaw recently moved to Crest Nicholson’s Evolve in Swindon, a contemporary collection of three, four and five-bedroom homes which forms part of the popular Tadpole Garden Village development. “We’ve wanted to move to Swindon for some time in order to be closer to our family, and we had quite a lot of unused space in our old house,” explain the Shaws. “As soon as we visited Evolve, we knew that this would be the perfect place to downsize to.”

Set on the outskirts of the quaint Wiltshire village of Blunsdon, the collection enjoys a luxurious countryside feel. Having chosen to downsize to their new three-bedroom home after moving down from Cumbernauld, Scotland, the couple are delighted that their home has been finished to the highest possible standards, with contemporary furnishings and décor throughout. Robert noted that they “were especially drawn to the open-plan design of the living areas,” after being used to traditional layouts in the past. “It’s been a nice change – we wouldn’t look back,” he explained. Doreen and Robert have also enjoyed adding their own touches throughout the property, recently installing brand-new fitted wardrobes and light fittings.

The Shaws were particularly attracted to Evolve’s Garden Village Principles, which work to combine the best of town and country living to create beautiful, well planned and vibrant communities. The Shaws add, “Being able to step outside and take in the surrounding greenery and fresh air never gets old. We love the green aesthetics of Evolve and watching the ducks and swans swim past.”

By creating the best possible living environment for residents, the wider Tadpole Garden Village development aims to leave a positive legacy for the future. This is reflected in the new village’s design, greenery and thriving local habitats.

When it comes to getting around, the A419 and M4 are both within easy reach. A number of local bus and train stations are also within proximity of Tadpole Garden Village, which means that the hustle and bustle of city life is easily accessible. Homes at Tadpole Garden Village provide a variety of different character areas, with each phase of the development contributing unique and quality new homes for a sustainable and healthy community.

Find out more about homes at Tadpole Garden Village, from two-bedroom apartments priced from £195,000 to three, four and five-bedroom houses available from £305,000 by visiting: https://www.crestnicholson.com/developments/tadpole-garden-village/.