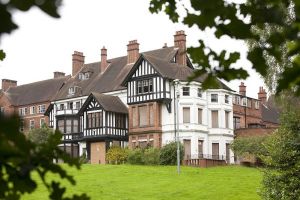 Award-winning developer Crest Nicholson has recreated history by rebuilding the iconic former home of the founder of Cadbury’s at its new Birmingham development, Manor House at Bournville Park. Using historic records including photographs and drawings of the original property, which date back to the mid-1700s, architects were able to restore the site back to its former glory, seven years after it burnt down.

As a replica of the former home owned by John Cadbury – which was known as Northfield Manor House before it was sold to the University of Birmingham in the 1950s – the development features traditional designs and period elements throughout such as high ceilings, spacious rooms, large bay windows and double patio doors. Whilst in keeping with the original design, Manor House now boasts 26 one, two and three bedroom contemporary apartments, offering light and airy interiors and spacious open-plan living areas.

Richard Cowie, Technical Director at Crest Nicholson Midlands, comments: “We worked with conservation officers to recreate the original building to the highest degree of authenticity and the result is stunning. As a former stately home with a large private driveway and a view overlooking beautiful green grounds, the development feels very grand. The layouts of each property have been expertly designed to incorporate the original period features. With a high specification throughout, Manor House offers residents all the benefits of a new build home, whilst also benefiting from the uniqueness and character behind this development.”

Matthew Williams, Director at HGP Architects, comments: “With memories of playing in the front garden as children, the Cadbury family was very eager to see the building, and its surroundings, returned to their former glory. To be faithful to the original building, we trawled through historic records, examining old photos of moulding around chimneys and intricate brick detailing, to ensure the building was a true replica. We also sourced traditional tradespeople and materials from across the country to bring this home back to life and keep the legacy alive.”

Surrounded by open green space and mature grassland, Manor House at Bournville Park offers residents a tranquil setting on the edge of the picturesque village of Bournville, while being just six miles from the centre of Birmingham. There is also a range of amenities nearby including shops, healthcare facilities, pubs and restaurants, as well as Cadbury World, a tourist attraction located on the grounds of the original factory.

For commuters, central Birmingham is just a 20 minute drive away, or 25 minutes by bus, while the M40 is only a 15 minute drive, offering quick links for journeys south.

Now with over 60% sold, prices for Manor House at Bournville Park start at £195,000 for a one bedroom apartment, £245,000 for a two bedroom and £295,000 for a three bedroom. The Government backed Help to Buy: Equity Loan scheme and Home Reach, Crest Nicholson’s part buy-part rent scheme, is available on selected properties. To find out more, or to book an appointment to view the development, please call 01217 560 953 or visit https://www.crestnicholson.com/developments/manor-house-at-bournville-park/