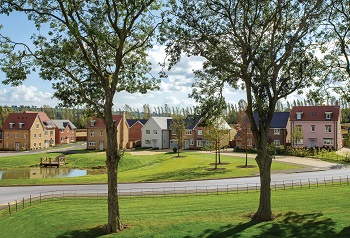 Award-winning housebuilder Crest Nicholson has announced the launch of the latest phase at its Monksmoor Park development in Daventry. Meadowside at Monksmoor Park is a new collection of homes at the popular Daventry development, comprising one and two bedroom apartments, and two, three and four bedroom homes.

At Meadowside, homes are traditional in style, and have been designed to reflect the needs of modern life, with flexible, open-plan living areas throughout. Each property has been finished to the highest specification and, as with all Crest Nicholson homes, A-rated appliances have been fitted to keep energy bills to a minimum.

Meadowside is perfect for both first time buyers and second steppers looking to gain some extra space. It has been designed in the style of a 21st Century Garden Village, which aims to create a beautiful, healthy and sociable community where the natural environment can be enjoyed by all. Situated beside the Grand Union Canal, homes at Meadowside are nestled amongst an abundance of open space with far reaching views over the stunning Northamptonshire countryside.

Daventry’s historic market town centre is also easily accessible from Meadowside, with a wealth of independent retailers and larger shops, such as Waitrose, gracing the high street. In addition, the M1 is within close proximity to the development, and nearby Long Bucky station provides direct trains into London in an hour and 15 minutes, and Birmingham New Street in just 55 minutes.

David Hnyda, Sales and Marketing Director at Crest Nicholson’s Chiltern division, said: “We’re very pleased to announce the launch of Meadowside, the next exciting phase of our thriving Monksmoor development. Since launching, Monksmoor Park has been met by strong demand from buyers looking to relocate to this picturesque location, and we expect these new homes at Meadowside to prove just as popular.”

For more information or to register your interest call 01327 220079 or visit www.crestnicholson.com/meadowside