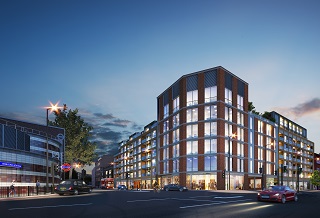 The site of the development boasts a rich heritage, dating back to 1518 when the site was home to a Tudor Palace belonging to the Duke of Suffolk, Charles Brandon. Brandon House is the third and final development to be launched as part of Crest Nicholson’s luxury SE1 portfolio, which brings three new developments to the Southwark area, and is set to launch this autumn.

At Brandon House, homes have been designed to cater to the needs of modern city life, with large, open-plan living rooms facilitating flexible internal living. All properties come with at least one private terrace or balcony, providing residents with much sought-after outdoor space within the central city location. Some properties also offer fantastic views of the city, capturing a number of London’s notable landmarks such as The Shard and the City.

Located on Borough High Street, the development offers unrivalled transport links to the rest of the capital, as well as being a short walk from Bermondsey’s eclectic selection of bars and restaurants. The culinary delights of Borough Market are just minutes   from the development, and the cultural hub of London’s South Bank is also within easy reach.

Sean Ruane, Sales and Marketing Executive at Crest Nicholson London said, “We’re delighted to announce the launch of the third and final development in our fantastic SE1 portfolio. Brandon House sits in a prime central location, and with a high specification and contemporary design we expect a great deal of interest among those looking for a modern development in the heart of London’s historic quarter.

“With a fantastic location directly opposite Borough Underground station, homes at Brandon House provide the perfect base for city commuters, as well as those looking for a Pied à Terre in the city.”