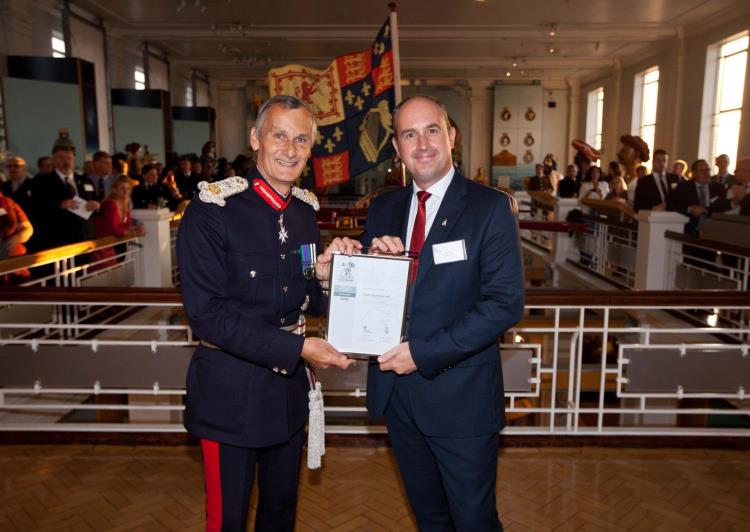 On Wednesday 4th September, Crest Nicholson was officially awarded the Silver Employer Recognition Award by Reserve Forces and Cadets Association at a ceremony onboard HMS Victory in the Historic Dock Yard in Portsmouth.

The Silver Award from The Defence Armed Forces Employer Covenant Recognition Scheme (ERS) is presented to organisations that promote and provide a range of initiative for those with ex-military backgrounds, including employment opportunities and training schemes.

This award comes less than a year after Crest Nicholson signed the Armed Forces Covenant, an agreement which promises to offer those that are leaving, or who have left the military, an opportunity to build a career in the housebuilding sector through a dedicated training scheme. In addition, the developer’s Arborfield Green development in Berkshire is being delivered in partnership with the Ministry of Defence on the site of the former Arborfield Garrison.

Mike Robb, Group HR Manager at Crest Nicholson, comments: “As a business, Crest Nicholson has an ongoing relationship with the Armed Forces. We currently employ approximately 40 members of staff with connections to the military, whether that be family members or those with ex-military backgrounds, including myself.

“It is a fantastic achievement to be nationally recognised for a Silver Award from the UK Ministry of Defence, reaffirming our work in the recruitment and training sphere, as well as our involvement with local charities and support groups. The awards ceremony was a fantastic celebration of our ongoing commitment to the Armed Forces community and it was an honour to be surrounded by various national businesses who also support these amazing men and women.”

Commenting on the announcement of the 2019 Employer Recognition Scheme Silver awards, Defence Secretary, Ben Wallace said: “These awards recognise the outstanding support for our armed forces from employers across Britain and I would like to thank and congratulate each and every one. Regardless of size, location or sector, employing ex-forces personnel is good for business and this year we have doubled the number of awards in recognition of the fantastic support they give.”

Minister for Defence People and Veterans Johnny Mercer, said: “Veterans make a huge contribution to businesses across the country and it’s fantastic to see a record breaking number of organisations recognised for their support. We’re working closely with businesses to help them further understand the huge value that veterans, reservists and military spouses can bring to their organisation.”

Awarded Best Training or Recruitment Initiative at the 2017 Housebuilder Awards, the Crest Nicholson Site Management Academy is open to ex-members of the Armed Forces. The industry-leading programme provides candidates with invaluable hands-on experience and the skills to build their careers.

Crest Nicholson has also recently signed up for the Forces Families job board, offering opportunities to Forces spouses and family members with valuable skills to apply to open vacancies. For more information, please visit www.crestnicholson.com/about-us/careers/training-and-development