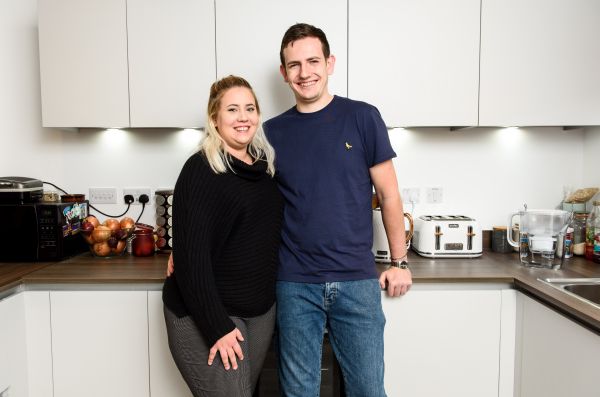 Both first time buyers, the couple had been renting in Essex before Joseph was relocated to Southampton for his job working for the UK’s largest insolvency firm. They had been saving up to buy their own place and decided that it was the right moment to take their first step on the property ladder.

Commenting on the development, Joseph said, “I had seen my father’s place in Bath; they have similar layouts, and both have really modern, spacious designs so I felt confident buying off the plan. We bought the property when it was nothing more than bricks, we had seen CGIs and knew that Crest Nicholson would deliver the same high standards and specification.”

All two bedroom houses at Centenary Quay boast open kitchen/living/dining areas which provide light and cosy places to relax and unwind. They also offer a private back garden, a courtyard parking space and two good-sized bathrooms. Speaking about the house’s design, Joseph said “the floor to ceiling windows are a particularly great feature as they allow a lot of light into the rooms. The open plan layout is also great for hosting friends and family, which we made good use of during the Christmas period.”

Joseph also highlighted some of the excellent features of the property, citing the built-in dishwasher, fully-fitted kitchen and the generous number of ethernet cable ports and USB sockets. He said, “the overall feel of the property is really modern, and it’s been cleverly designed with technology in mind, with access points in the living room and main bedroom.”

The final properties at Centenary Quay are still being built, however, Joseph commented that the neighbourhood already had a community feel. He said, “I’ve already met a few of the neighbours. The development is in a great location, right on the riverside, with several local pubs within walking distance.  We also love visiting the Hamble and the Royal Victoria Country park, which are both just a short journey away.”

Speaking about the buying process, Joseph said, “the Help to Buy loan made the whole moving process a lot smoother and easier. We exchanged in March 2019 and didn’t move in until the house was ready in October, so we had plenty of time to plan ahead with things like furniture. The sales team were also really friendly, and we felt supported throughout the process.”

Crest Nicholson’s Centenary Quay is perfect for those looking to move to a fantastic city location on the banks of the River Itchen, with good travel connections and a vibrant community. Only a handful of sought-after waterside apartments remain at Centenary Quay, while a selection of one and two bedroom apartments are now available to buy with prices starting at £185,000. For more information, or to book an appointment with our sales team, call 02380 084 148 or visit https://www.crestnicholson.com/developments/centenary-quay/.