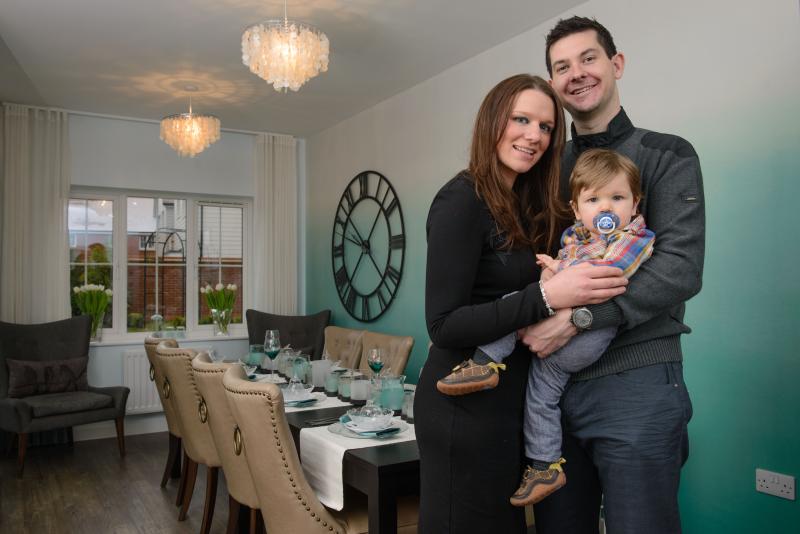 A new dad has told how two equity loan schemes allowed his family to firstly get onto the property ladder – and now take their next step up to a larger dream home.

David said high house prices in the area meant the schemes were the couple’s only option if they were to afford the size of home they wanted.

He said: “We had our son almost a year ago and with plans to expand our family we knew we would need to move to a bigger home eventually.

“Unfortunately for us, the prices of houses in the area which suited our needs were just too high, so we looked again at the deals on offer and Help To Buy seemed a fantastic option.”

The government’s Help To Buy scheme makes it possible to purchase a new or existing home worth up to £600,000 with just a five per cent deposit.

The Owen couple’s previous three bedroom property was bought using EasyBuy, which saw Crest defer 25% of the property’s to be paid back at 25% of the property’s open market value at any time up to resale or after 10 years, whichever was sooner.
David said he and Carly were keen to stay in the area as it has such fantastic transport links and – importantly – good schools for their son and future children.

He added: “There are some great schools in the area so we didn’t want to move too far. Cheshunt also offers the perfect balance between being quiet and far enough from London but not too far to commute to the city.

“I work in Tottenham Court Road so have to travel in to town. Luckily, we’re right in the middle of two train stations which can take you to London Liverpool Street in half an hour so we’re spoilt for choice.

“When the site here is eventually fully finished it will be really lovely. The ponds and flowers are a nice touch. It’s a beautiful place to raise a family and we couldn’t be happier.”

Situated on the outskirts of Goff’s Oak, one of the most desirable parts of Cheshunt, this sympathetic scheme will provide character areas with tree lined boulevards, whilst some of the homes face onto the green open spaces; a key asset to the overall masterplan design.

The site benefits from unrivalled transport links, making it ideal for commuters. Customers who drive will certainly be well connected - the A10 is close by and affords excellent links to the M25, as well as the M11 & A1.

Train services are also available from nearby Cuffley to Moorgate in 40 minutes and from Waltham Cross to Liverpool Street in under half an hour. Cheshunt station on the proposed plans for Crossrail 2 that would link Hertford East through to Kings Cross, Chelsea and South West London, such good connections will provide potential for capital growth in the long term.

Further properties will be released for sale at Sovereign Gate imminently. For more information telephone: 01992 662920 or visit: www.crestnicholson.com/sovereigngate