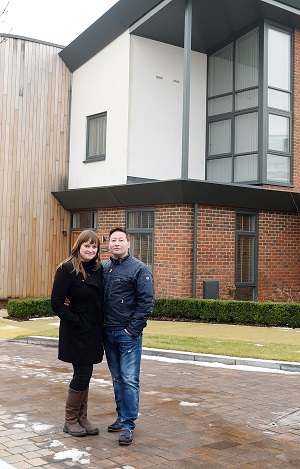 Rosanna Evans and Patrick Erni bought their Upper Longcross home together in leafy Surrey (with Jinxy the cat), having previously lived in Wimbledon.

The need for greater space drew them to the Crest Nicholson garden village, where they became homeowners for the first time for the value of £599,950.

Three bedrooms (four if you include the convertible study) mean there is plenty of space for the young couple, who have half a mind on the future and parenthood; a large garden which sees plenty of sun throughout the day is an added bonus.

On what drew her to Upper Longcross, Rosanna said, “We love the fact that it feels like you’re in the countryside so it’s nice and peaceful. I used to go to university at Royal Holloway and therefore we associate this area with happy memories. It’s also nice to be so close to areas of familiarity such as Virginia Water.”

Patrick added: “I work abroad a lot and so the relatively close proximity to Heathrow is ideal. I’m also particularly keen on the design of Upper Longcross: the wooden features throughout the house, especially the wooden spiral staircase, as well as the greenery and water features on the development.

Beyond the proximity to Heathrow, there is much to recommend about the location of Upper Longcross. There are a number of pubs and eateries close by, but above all is the sense of peace and quiet.

And what have the couple changed since moving in? Rosanna explains: “We have made the light fittings a feature of our house. We have 11 fittings in total and rather than getting simple lampshades we decided that we wanted each to be special. We toured showrooms up and down the country before settling on the 11 we have now.

“We also decided to make two rooms themed in our house: an African themed study as Patrick is half South African, and a Disney themed third bedroom because, well … I’m the biggest Disney fan alive!

“We hope our leafy residence will become something of a 'home away from home' for our families. Indeed my mum and dad are already looking forward to future house and cat-sitting opportunities and viewing it as a wonderful countryside retreat whenever we are away!

When it comes to Upper Longcross, Rosanna concluded: “'Some people look for a beautiful place, others make a home beautiful …  We feel we have the best of both worlds here; not only is the design of our house stunning and unique but we feel we have truly made our mark on it inside too”

For more information on Upper Longcross, call the sales team direct on  01932 967020 or visit www.crestnicholson.com/upperlongcross