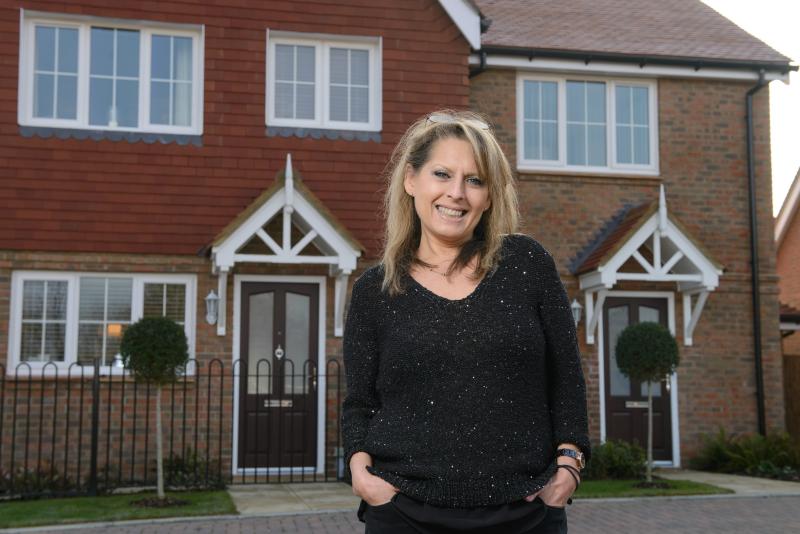 When Jacqui Jacobs decided to sell her four-bedroom home and move to a smaller property, she knew it would be tough to find a place which ticked all of her boxes. But the Weight Watchers leader had no idea her search would take so long – over a year, in fact.

Having scanned the internet every single day hunting for the perfect home, she was almost ready to throw in the towel when she discovered Crest Nicholson Eastern’s Sovereign Gate development…and couldn’t believe her luck.

“I was so relieved, I actually hugged the girl in the sales office,” she recalled. “I had been looking on the internet every day and had pretty much given up on finding my dream home. My daughter had even started jokingly calling me a ‘house snob’ because I had turned my nose up at so many properties.”

Jacqui had been living in Loughton, Essex, before a change in circumstances saw her having to downsize to a two-bedroom semi-detached home – a growing trend in Britain.

A recent survey* revealed increasing numbers of people are looking to downsize in a bid to unlock an estimated £136.5billion sitting in property equity.

Jacqui spent time living with her daughter and also her son, before finding her Crest Nicholson home – and throughout her search she was determined not to have to compromise on her dream property.

She said: “Having come from a larger property where I’d lived for 22 years, I didn’t think I would ever find something by downsizing which I would fall in love with in the same way, but thankfully at Sovereign Gate I really did.

“It ticked all of my boxes: it had a south-facing garden, a garage and even a side gate to hide my wheelie bins. I really liked the open-plan layout and the size of the bedrooms too. Plus, the house has a beautiful view of the landscaped open area to the front. It’s in a really pretty part of the development and I just felt really at home straight away.

“I think my daughter was just as relieved as I was when I found it and she absolutely loved it as well. I think she feared I’d never get something that wasn’t a compromise.”

Since moving from Essex to Cheshunt, in Hertfordshire, Jacqui is continuing to run her Weight Watchers meetings – which were how she heard about Sovereign Gate in the first place.

“It was actually a member, Joyce, from one of my meetings who suggested I look at the area,” she laughed. “I’d never considered it up until then, so I have a lot to thank her for!”

Sovereign Gate is an attractive collection of two and three bedroom cottages and four bedroom family homes located in Goffs Oak, a sought after part of Cheshunt. The development benefits from fantastic access to the A10 and M25 and is a short distance from Cheshunt town centre and Cheshunt mainline station.

A new phase of properties at Sovereign Gate will be announced for sale in the near future. For more information please visit: https://www.crestnicholson.com/sovereigngate/