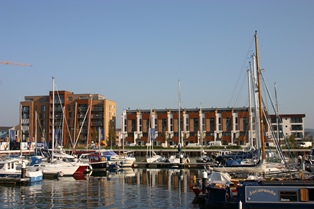 Crest Nicholson secured the award for Best Mixed-Use Development in the UK for its inspiring collection of town houses, apartments and retail units designed by architects Stride Treglown.

Set in a stunning waterside position just outside Bristol, Port Marine has proved an overwhelming success, and each phase of Crest Nicholson’s development has sold in record time. The latest phase, 110 at the Quay, has sold a staggering 43 apartments in the past four months alone.

The Sunday Times British Homes Awards 2013 took place at The London Marriot Grosvenor Square and is universally recognised as the country’s most highly respected awards for design and construction excellence.

Commenting on the accolade, Sandra Dixon, Sales and Marketing Director at Crest Nicholson South West, said: “We’re thrilled to have received such a highly sought-after award for our homes at Port Marine, a stunning development that combines stylish edge of city living with a relaxed marina lifestyle. The retail side of the scheme offers bars and restaurants on the doorstep, and the mix of housing and apartments available means that the development is a great fit for every type of homebuyer.

“The British Home Awards set an incredibly high standard for design and innovative excellence in the construction industry, and winning the Best Mixed-Use Development is a testament to the quality of our homes at Port Marine which have quickly become one of the area’s most sought after addresses.”

Dominic Eaton, director of Stride Treglown who runs the residential team said: “We had hoped we would win something, and we were delighted that Port Marine was recognised, as it is a stunning quayside development.”

Prices at 110 at the Quay currently start from £149,600 for a two bedroom Petrel apartment using the Help to Buy Scheme.  Help to Buy enables purchasers to own their own home with just five per cent deposit and 75 per cent mortgage. The remaining cost of the property is funded by a 20 per cent equity loan from the Government that is interest free for the first five years.

For more information about 110 at The Quay visit the on-site Sales and Marketing suite (open seven days a week 10am-5pm), call 0808 100 6009, email 110@crestnicholson.com or visit www.portmarine.co.uk Back
Our Business
Careers
Press Room
Sustainability
Charitable Giving
Community Engagement
We use cookies
This website utilises cookies in order to provide analysis of our visitor data, to improve our website, show personalised content and to give you the best experience. For more information, click here.
Accept