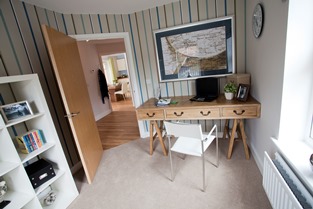 New market insight from house builder Crest Nicholson suggests that a large proportion of second-time buyers in Worcestershire are unaware of how the government’s Help to Buy scheme could assist with their next step up the property ladder. Across the company’s developments in the Midlands only 17 per cent of people using the scheme are second steppers which means many could be missing out on their dream home.

At St James Mead in Badsey, for example, the The Meadvale is on the market for £223,960 with Help to Buy. With a full market value of £279,950, the scheme alleviates the difficulty of having to raise the extra 20 per cent, without jeopardising the ability to accrue equity.

The Meadvale boasts a large, triple aspect living room with French doors opening out onto the garden.  Also on the ground floor is a separate study, which has the potential to be adapted into a play room, and the kitchen/breakfast room offers a second route to the garden with French doors helping to create an alfresco feel to dining.

Located on the first floor of the Meadvale are the sleeping quarters, where you’ll find the master bedroom with its own en-suite, a family bathroom and two further spacious bedrooms. There is also a fourth bedroom ideal for children, a guest room or even a walk in wardrobe for those who live for luxury!

Amanda Benjamin, Senior Sales Manager at Crest Nicholson, explained: “Whilst first-time buyers have taken full advantage of the government’s Help to Buy scheme, it seems that very few second-time buyers are aware of how it can assist them too. There have been numerous reports outlining how people are putting their plans to start a family on hold because their homes are too small, but Help to Buy can help them to upsize into a property that is designed for either a growing or established family.