About us > Press room > Property Market Booming in Birmingham 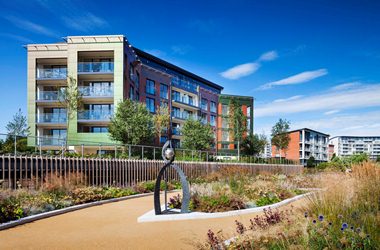 According to national housebuilder, Crest Nicholson, Birmingham’s property market is going from strength to strength in the city centre, with demand for homes the highest it’s been since the market crashed in 2007.

This claim follows substantial sales success at the developer’s Park Central site located off Lee Bank Middleway, where all of the new houses in the latest phase have been sold within just one month of being launched.

A rare find in the city centre, the majority of the houses were snapped up by people who have already purchased a property at the development, representing either a second investment or a move up the property ladder. Many of the new purchasers also benefited from Crest Nicholson’s Recommend a Friend scheme.

Amanda Gales, sales manager at Park Central, said: “The sales rate at Park Central has far surpassed our expectations this year. To have sold out of all our houses at Park Central within a month of being launched is phenomenal and demonstrates just how high the demand is for quality new homes in the city centre.

“The fact that we’ve sold the majority of the houses to people who have already purchased a property at Park Central is testament to the high quality build and luxury specification on offer.”

All seven houses, located within the Madison Walk phase at Park Central, were purchased from plan, meaning that, as well as securing their favourite plots early, the new purchasers also benefit from being able to choose the kitchen and tiles that suit them best.

There is currently a range of one and two bedroom apartments left to purchase in Madison Walk, starting in price from £122,500.

All the houses and apartments have been designed to a high specification and boast Symphony kitchens, contemporary bathrooms boasting Hansgrohe technology and modern open-plan living.  Additionally, all of the properties are positioned around eight acres of landscaped parkland and are covered by a 10 year NHBC warranty.

Amanda said: “There’s a lot happening in Birmingham next year, including John Lewis opening its doors, as well as the revamped Mailbox, and the completion of New Street Station. With all this going on it’s no wonder that many people believe now is the right time to buy in the city and predict that these strong sales will continue during 2015.”

Park Central is ideally situated in Birmingham city centre; with the business quarter less than a 30 minute walk away and Brindleyplace just five minutes. For those commuting to work, Five Ways train station is also only a five minute walk.

For more information about the properties at Park Central contact the sales team on 0121 666 4666 or visit www.parkcentral.co.uk.  Alternatively visit the Park Central marketing suite which is open daily from 10am to 5pm and is located at 61 Mason Way, Birmingham B15 2GE.