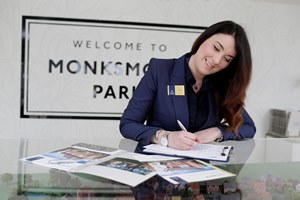 Crest Nicholson, the award-winning housebuilder behind Monksmoor Park in Daventry, has announced the appointment of Kerri Grice as its new sales advisor following overwhelming interest in its impressive new homes.

The development of high specification two, three, four and five bedroom houses in Welton Lane officially launched to the public in April this year and nearly 30 homes have already been reserved. The homes have proved so sought-after that Crest Nicholson has needed to grow its sales team to meet demand from local house-hunters.

30-year-old Kerri joins Crest Nicholson from Connells estate agency in Northampton and brings with her five years’ experience in the property market. Having previously worked mainly with second-hand homes, Kerri actually first began working with Crest Nicholson in November last year when Connells became the partner estate agent for Monksmoor Park. She has since undergone Crest Nicholson’s in-house training programme and will take up her new role with the company from 1 July.

Kerri Grice, Sales Advisor at Crest Nicholson, said: “I’m so thrilled to be joining the Crest Nicholson family. I’ve been really impressed with the company’s whole ethos and approach to housebuilding and I think this care and attention is reflected through their staff. Most of the sales advisors I’ve met have been with Crest for over 10 years so you know it must be a good company to work for and I leapt at the chance when this job came up.

“I’ve always worked with older properties in the past but I’m a contemporary girl at heart and completely fell in love with Monksmoor Park when I first saw the plans last year. The homes are traditionally designed and have real character curb appeal, combined with an incredibly high, modern finish to the interiors – it’s not hard to see why they’re proving so popular! My background as an estate agent means I really understand the wider property market and so I can advise customers on the best ways to achieve a quick sale and good price on their existing home, as well as how best to avoid sales chains from affecting progress with their newbuild home.”

Monksmoor Park is a stunning collection of 160 traditional homes nestled in an abundance of open space and bounded between the reservoir and Grand Union Canal with beautiful countryside views. Designed as a 21st Century garden village, the development promotes the very best of city and country living, combining high specification homes with green open spaces, whilst still enjoying good access to commuter destinations such as Northampton, Birmingham and Milton Keynes.

Under the Help to Buy scheme, prices at Monksmoor Park currently start from £167,960 for a three bedroom Halstead house and £207,960 for a four bedroom Monksfield house. The scheme enables homebuyers to own their home for just 80 percent of the purchase price with a deposit of as little as five per cent. The remaining 20 per cent of the property price is lent to the purchaser by the Government and is interest free for the first five years.

For more information visit the Sales And Marketing Suite (open Thursday to Monday, 10am-5pm), call 01327 220 079, or visit www.crestnicholson.com/monksmoorpark and www.facebook.com/CrestNicholsonMidlands.
Back
Our Business
Careers
Press Room
Sustainability
Charitable Giving
Community Engagement
We use cookies
This website utilises cookies in order to provide analysis of our visitor data, to improve our website, show personalised content and to give you the best experience. For more information, click here.
Accept