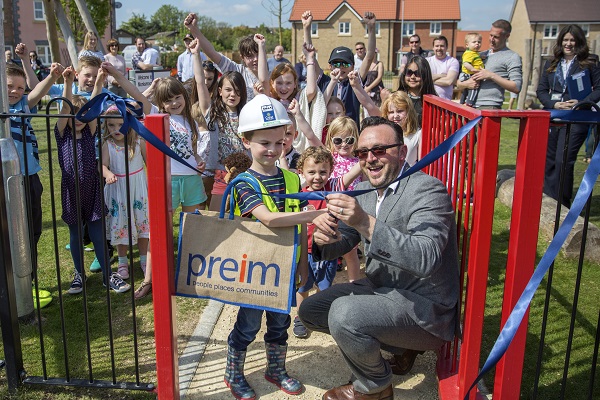 Approximately 75 residents attended the official opening ceremony of the play park on Sunday 7th May, with the ribbon being cut by Chris Cox, Project Manager at Monksmoor Park.

The event also included a range of activities for the children, including a gingerbread and coin treasure hunt, and a ‘name the park’ competition. The winning name, ‘Daisy View Park’ was pulled out of the selection box by Kerri Grice, Sales Advisor at Monksmoor Park.

Crest Nicholson is investing over £11 million in the local Daventry community as part of a comprehensive ‘community benefits package’, which also outlines the delivery of a range of services and amenities aimed at benefitting the local community.

Chris Cox, Project Manager at Monksmoor Park, said: “It has been fantastic to welcome so many of our residents here to officially open the play park. I can remember playing in a park near to my home when I was young, which I remember with fond memories. I am really looking forward to you all enjoying this park just as much as I enjoyed mine. We have worked closely with Preim to ensure that the play park will be a central part of the Monksmoor Park community for many years to come.”

Andrew New, Director at Preim, said: "It’s great to see the strong sense of community emerging at Monksmoor Park, and the early public infrastructure delivered by Crest Nicholson has been a huge impetus behind this. Facilities like this play park are crucial to creating places people really want to put down roots. The popularity of the play park, alongside Crest Nicholson’s additional community facilities, showcases the importance of placemaking within the development.”