Local couple invest in their future at Liberty Park 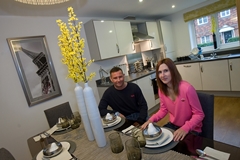 According to newly released figures from the Office of National Statistics*, first time buyers able to save £250 per month towards a deposit would have to wait nine years to raise enough money for a first home in London*.  However it’s not just in London that raising a deposit is a problem; one of the major barriers to buying for young people looking to get out of rented accommodation is the size of deposit they need to save.

With this in mind, the Government launched NewBuy, which effectively introduced 95% mortgages, meaning buyers using the scheme only need 5% of the deposit. Newly-wed Liberty Park residents, Lee (37) and Nikita (27) McAllen have both their feet on the property ladder thanks to NewBuy.

Lee, an electrician and Nikita, a budget controller, had been renting in and around the Hoo area for years but never expected that they could afford their own home.  Lee said, ”When we heard about Liberty Park, we decided that it was a good idea to visit the show home.  We lived round the corner and were increasingly frustrated by wasting money on rent when we’d rather be paying our own mortgage.  Although we really loved the development, we didn’t have a big deposit and therefore we really didn’t expect that this was the beginning of our journey to becoming homeowners.”

When the couple visited the experts at Liberty Park they were told about New Buy.  Nikita, says; “When we found out that we were eligible for the New Buy scheme I was ecstatic and wanted to move in there and then.   We decided we wanted this to be our first family home and were amazed that we could afford a three-bedroom home with a garden and a garage.  We’re so excited to move in and start the next phase of our life together.”

Annette Cole, Sales & Marketing Director for Crest Nicholson Eastern said:  “We’ve seen so many new couples move into our properties and utilise the New Buy scheme.  It’s a big investment, not only financially but also a huge step for any relationship.

“We find that after years of renting, there comes a point in people’s lives when they feel that enough is enough and decide they don’t want to pay off their landlord’s mortgage making them determined to buy their own home.  With many incentives for first time buyers there are more options to become a homeowner.”

Both first time buyers and second steppers can take advantage of schemes at Liberty Park, including the Government-backed NewBuy and Help to Buy schemes as well as Part Exchange, whereby Crest Nicholson buys the purchaser’s existing home so that they may purchase a home at Liberty Park.

Liberty Park is located on Hoo Road in Wainscott. The development is well located and offers very good commutability to London and the wider Kent area.  Nearby Strood Mainline Station provides a fast train on the High Speed 1 line to St Pancras in just 32 minutes.  The station also offers efficient services to London Bridge, London Waterloo East and London Charing Cross in just over an hour and good access to the M2 motorway and A2, which are just minutes away.