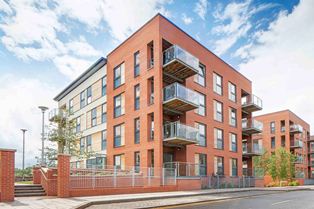 Just this week, a report by Mercer revealed that Birmingham was the top regional UK city outside of London in terms of quality of life. Crest Nicholson claims that this, along with Birmingham’s growing popularity both nationally and internationally, as well as the current retail, transport and business investment within the city, has resulted in there just being one apartment remaining for sale at Park Central.

Located within the newest phase at Park Central, Madison Walk (which comprises of just 31 contemporary apartments and townhouses), the remaining property is a two bedroom apartment that comes with an allocated parking space and is situated on the edge of the landscaped parkland at the development.

Priced at £158,000 the apartment boasts a spacious open plan kitchen, living and dining room, two double bedrooms with an en suite off the master bedroom, as well as an additional large bathroom and a private balcony.

Susan Young, sales and marketing director at Crest Nicholson Regeneration, said: “With the new John Lewis store set to open in a few months, improved transport links and the Rugby World Cup, as well as the many new bars and restaurants and the Everyman Cinema that has just opened at The Mailbox, this is a great year to be living in Birmingham.

“Park Central’s location, being just a five minute walk from The Mailbox and Brindleyplace, is one of the main reasons why so many people have chosen to purchase one of our apartments here.  Combined with the high quality and modern appearance of the apartments and the eight acres of green space on the doorstep, it’s no surprise that we’re now down to our last apartment for sale at Park Central.”

Park Central is home to a variety of homeowners including young professionals, students and families working and studying in the city.

All the homes at Park Central have been built with high quality fixtures and fittings, including designer kitchens and contemporary bathrooms and are covered by a 10 year NHBC warranty and Crest Nicholson’s two year customer care support.

Now in its twelfth year, Park Central is a regeneration project of great significance in Birmingham, having transformed the former Lee Bank area which was once a notorious hot spot for crime and poor social behaviour. Park Central has been delivered by Crest Nicholson in partnership with Birmingham City Council and Optima Community Association and the development is already home to over 1,250 apartments and freehold townhouses, together with 285,000 sq ft of commercial space. Just one phase remains to be delivered at Park Central with plans due to be revealed in due course.

At the heart of Park Central is a newly opened park link which joins together the Moonlit and Sunset Parks – two landscaped public parks spanning eight acres, providing quality outdoor space in the city centre.

For more information visit www.parkcentral.co.uk or pop into the marketing suite, located at 61 Mason Way, Birmingham B15 2GE, which is open daily between 10am and 5pm. To make an appointment to view the last remaining apartment, call 0121 666 4666.