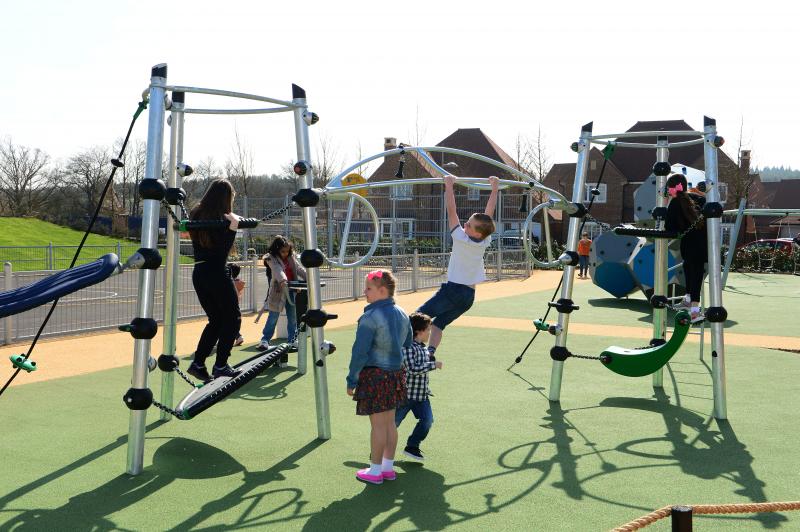 Guests at the event were offered champagne and canapés on arrival and were welcomed with a speech from the Chairman of Horsham before the park was officially opened by a ceremonial cutting of a ribbon. Local residents and visitors were then treated to an Easter egg hunt. One year old Katie was the lucky finder of the golden bunny and won a game of snakes and ladders.

The Neighbourhood Park has been delivered in advance of Crest Nicholson’s planning permission obligation, showing the company’s commitment to creating a high quality development with a great sense of community. The park was informally opened to residents on 6 March and has proven to be a great success with a number of residents regularly visiting to make use of the facility.

Kilnwood Vale is thoroughly contemporary in concept but also draws on the principles of the Garden City movement, which is why the opening of the open space is a great milestone for the award-winning property developer. The streets are lined with trees and the external infrastructure includes cycle paths.

Christine Tiernan, Sales & Marketing Director at Crest Nicholson South said: “We are delighted to officially unveil the open space area at our Kilnwood Vale development. The park opened to residents last month and has already proven to be a fantastic new addition which is great to see.  The whole development has a real community feel and the park enforces this even further.

Kilnwood Vale is a collection of homes in West Sussex surrounded by open countryside in the sought after area of Faygate between Crawley and Horsham. The sustainably built development already has 70 occupants and is located near to a range of local services and excellent public transport links.