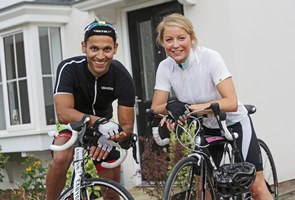 Sporting enthusiasts Kimberley Dowe and Jake Lowe have finally got somewhere to store their beloved bikes, thanks to award-winning housebuilder Crest Nicholson and the Government’s Help to Buy scheme.

And their new home at Denby Bank in Marehay even looks out over the fields where they spend all of their free time running and cycling.

For PA Kimberley and personal trainer Jake, the location of Denby Bank was the main attraction. Kimberley explains: “We both work in the centre of Derby and spend a lot of time trail running and cycling around the Denby and Matlock areas, so we wanted to be close to the city and the countryside.”

“With Derby less than 20 minutes away by car, and the Peak District just a ten minute bike ride in the other direction, Denby Bank really does offer us the best of both worlds. And once we stepped inside the house and saw the incredible views of the countryside from the living room window, it was love at first sight.”

Having set their hearts on a four-bedroom Langdale house with a garage and a car port, Kimberley asked her father Gary, a trained builder, to give it the once-over.

“We really liked the house and thought the quality of the finish – right down to the door handles – was superb, so we were delighted when my Dad gave it his seal of approval.”

However, the couple had not even considered taking their first step on the property ladder until a colleague told Kimberley about the Government’s Help to Buy scheme.

“We were in Germany last September, running the Berlin marathon, and buying a house wasn’t even on our radar at that point but when we came home I got chatting to my boss and he suggested we look into it. Four months later we had moved in!”

Since its introduction in April 2013, Help to Buy has enabled first-time buyers’ to purchase their own home with just a five per cent deposit and a 75 per cent mortgage. The remaining cost of the property is funded by a 20 per cent equity loan from the Government which is interest free for the first five years.

Kimberley added: “The Help to Buy scheme is very straightforward and really easy to use. There were no delays, no complications and, in our case, no chain.”

In addition to the quality and affordability of their new home, Kimberley and Jake were also impressed by the level of support Crest Nicholson offered them.

Kimberley explained: “The customer service we received was excellent. As this was the first time we’d bought a property we were a bit nervous but the sales staff gave us lots of information and didn’t pressurise us to make decisions quickly. The team really bent over backwards to help us and since we’ve moved in we’ve become really good friends with the site manager who has also bought a house here!”

Situated on the outskirts of Marehay in the beautiful Amber Valley, Denby Bank is a traditionally designed development located within close proximity of a number of larger towns and cities and just a stone's throw from the Peak District. Under the Help to Buy scheme, prices currently start from £114,360 for a three bedroom Hereford house.