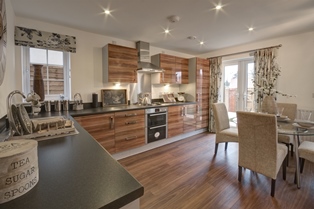 At The Furlongs in Hereford, for example, The Harvington is on the market for £164,760 with Help to Buy. With a full market value of £205,950, the scheme alleviates the difficulty of having to raise the extra 20 per cent, without jeopardising the ability to accrue equity.

Amanda Benjamin, Senior Sales Manager at Crest Nicholson, explained: “Whilst first-time buyers have taken full advantage of the government’s Help to Buy scheme, it seems that very few second-time buyers are aware of how it can assist them too. There have been numerous reports outlining how people are putting their plans to start a family on hold because their homes are too small, but Help to Buy can help them to upsize into a property that is designed for either a growing or established family.

For further details, please contact the sales and marketing suite on 0870 753 1864, email thefurlongs@crestnicholson.com or visit www.crestnicholson.com. Back
Our Business
Careers
Press Room
Sustainability
Charitable Giving
Community Engagement
We use cookies
This website utilises cookies in order to provide analysis of our visitor data, to improve our website, show personalised content and to give you the best experience. For more information, click here.
Accept