Homes for heroes in Hereford

About us > Press room > Homes for heroes in Hereford 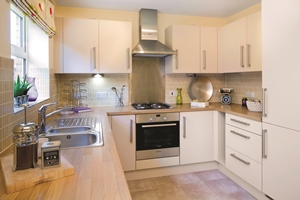 The third phase of the government’s Help to Buy scheme will launch on 1st April 2014 with a new product tailored specifically for serving members of the Armed Forces, allowing them to borrow up to 50 per cent of their annual salary.

With just 35 per cent of military personnel under officer level owning their own home, compared to 65 per cent of civilians in equivalent socio-economic circumstances*, the scheme is intended to address the low rate of home ownership amongst the Armed Forces, enabling service personnel to borrow up to £25,000 for their deposit.

With numerous developments located close to military barracks or in military towns across the UK, developer Crest Nicholson has signed up to the scheme and is preparing for an influx of new purchasers once Forces Help to Buy goes live.

Amanda Benjamin, Senior Sales Manager for Crest Nicholson Midlands, said: “Help to Buy has already opened the door to homeownership to so many first and second-time buyers and we fully support this third phase of Help to Buy tailored to the Armed Forces.

“We have a number of developments which are near to military barracks, including The Furlongs in Hereford, and already receive a lot of interest from the stationed personnel.  This scheme will make homes even more accessible and we look forward to helping more local service men and women to find their dream home.”

Hereford Garrison is home to 22 SAS Regiment; a special forces regiment of the British Army which has served as a model for countries all over the world.  Less than four miles away is The Furlongs, a popular development of new homes from award-winning housebuilder Crest Nicholson.

Located on Roman Road in Holmer, north Hereford, The Furlongs offers an eclectic mix of two, three, four and five bedroom homes within easy access of central Hereford.  The development is ideal for families as there are a number of local schools nearby and it boasts its own play area.

One of the homes currently available is a four bedroom Langdale house which comes with both its own garage and carport.  The house boasts a spacious living room with bay window and open-plan kitchen / dining room complete with integrated Bosch appliances and French doors leading onto the garden.  Upstairs, the master bedroom enjoys a hotel-style en-suite shower room and is complemented by a large second bedroom and two further bedrooms. This house also benefits from a good sized family bathroom and downstairs WC.

Prices for this home using the new Forces Help to Buy scheme currently start from £173,560.  Up to £25,000 is potentially available from the Armed Forces as a loan towards the deposit.

For more information about The Furlongs and Forces Help to Buy visit the on-site Sales and Marketing Suite (open Thursday-Sunday, 10am to 5pm), call 0870 753 1864, visit www.crestnicholson.com/thefurlongs or find us on Facebook at www.facebook.com/CrestNicholsonSWWales.