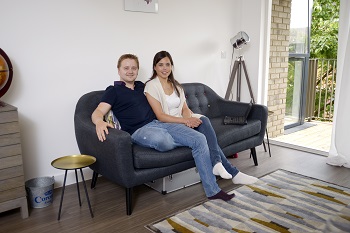 First time buyers Amanda Pinkney and Paul Peck have recently moved into a stunning apartment at Crest Nicholson’s Mitchams Park in the heart of Cambridge City Centre. The couple purchased a two bedroom second floor apartment off-plan for £395,000 at the development, which is based on the site of the former home of Cambridge City Football Club.

Amanda is a senior scientist working for Anglian Water, which is located in the nearby town of Huntingdon. She had been residing in Cambridge for a while and was keen to stay in the area. Her partner Paul, a consultant who previously resided in Wimbledon, works in the capital and wanted to be able to get into London easily.

For Amanda and Paul, the location was an instant draw, with the development conveniently placed within walking distance of the City Centre, Jesus Green and Midsummer Common. Amanda says: “Cambridge itself is full of heritage and art, restaurants and great places to shop. The location of the development is perfect, and we’re fortunate enough to be able to walk pretty much everywhere.” Paul adds: “My commute into London is straightforward – it only takes me 50 minutes to get to Kings Cross, which is ideal.”

Finding a home with good sustainability credentials was also important for Amanda and Paul. “We really do appreciate the approach Crest Nicholson has taken to using good quality materials. Our home features water saving taps, underfloor heating and other smart systems. It makes us feel better to know we’ve committed our money into a company and product which cares about the environment.”

Unlike traditional city centre dwellings, apartments at Mitchams Park benefit from an abundance of light and airy living space features.

Amanda recalls when she first viewed the Mitchams Park show apartment back in January: “The apartment was one of the first we looked at, and we fell in love straightaway! It was just beautiful, with floor to ceiling windows which were surprisingly high for an apartment. There’s also a great deal of light which makes it feel a lot bigger!”

Mitchams Park has been designed to stay true to its football legacy and encompasses central, pitch-like green areas and a planted ‘players tunnel’ linking two of the garden areas.

Amanda says while the football link wasn’t a deciding factor when selecting the house, they were thrilled to learn the development had a strong community feel: “We’re not mad about football but it is nice to understand the heritage of the site. We love the fact that there are leafy, communal gardens and there’s always community activities going on for people to get involved in.”

Properties are still available to buy at Mitchams Park with prices starting from £510,000, and a selection of homes available using Help to Buy. The Crest Nicholson sales and marketing suite and show homes are open daily, from 10am to 5pm. To schedule an appointment call 01223 656338.