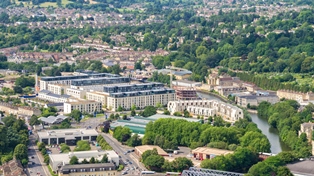 Bath bound house hunters who want a flat level walk into the centre of Bath should look no further that Crest Nicholson’s Bath Riverside.

Located on the south banks of the River Avon, it’s the only new development in the whole of Bath where residents can stroll from their home and be amongst all the shops and amenities without having to worry about the many undulations and hills the world heritage city is well known for.

Whether it’s for business or leisure, the appeal of being able to walk on the level, next to the river, has already attracted a large number of buyers - many of whom cited the ease at which they could walk into the city as a deciding factor for moving to the development.

The lure of this doorstep lifestyle has now become even more appealing not only with the availability of a number of superbly appointed penthouses that are ready for an immediate occupation, but also the launch of a brand new phase called Royal View.

Choosing between the pedestrian towpath or along Upper Bristol Road via Victoria Bridge, residents can walk to the centre in about 15 minutes, including Bath Spa train station.

It beats driving to work while many residents have found they are using their cars less and less – there is also a car club on site so anyone wanting to use a car can make use of this handy alternative.

To date, the majority of buyers have come from Bath with many saying they were fed up with having to contend with the hills as well as the traffic which has made carrying out the simplest of errands a bit of a chore.

There has also been an increase of interest from those looking to downsize, or as the Crest team likes to put it, rightsize, from larger Georgian properties which have higher running costs, to one that is much more energy efficient.

Christine Hamilton, sales advisor at Crest Nicholson said: “There’s no doubt that Bath Riverside’s location has been a key factor for many buyers and in particular the fact that it’s on the level.

“Being able to walk into the centre was a big draw for many people, especially as it doesn’t involve going up and down any steep inclines.

“For the discerning house hunter, it’s got the lot including location, variety of property types, fantastic specification and fact that some properties are ready to move into now. The properties also afford spectacular views of the city and surrounding countryside so residents can sit back, relax and drink in the view from the comfort of their own home.

“What it hasn’t got is hills!

“And that’s become an important consideration for older house hunters looking to sell the family home and potentially downsize or change to something new.

“They are just loving this doorstep lifestyle and I would urge those wanting to make the most of what Bath has to offer to do the same.”

Current availability includes a number of high-end penthouse apartments which not only provide a lifestyle like no other, but have stunning views of the hills, rooftops, parks and distinctive Georgian architecture that have made the city famous across the world.

For further information please call 01225 463 517 or visit www.crestnicholson.com/bathriverside Back
Our Business
Careers
Press Room
Sustainability
Charitable Giving
Community Engagement
We use cookies
This website utilises cookies in order to provide analysis of our visitor data, to improve our website, show personalised content and to give you the best experience. For more information, click here.
Accept