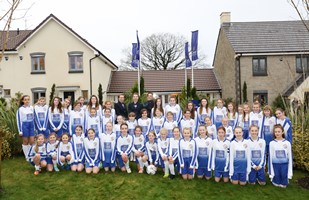 The girls at Bradley Stoke Youth FC are now dressed for success thanks to a generous donation from Crest Nicholson.  The under 11, 12 and 13 age group squads and the U10 development squad have received a brand new training kit courtesy of Highbrook Park, Crest Nicholson’s latest development of three, four and five bedroom new homes for Stoke Gifford.

Commenting on the donation, Tim Ridges, Senior Sales Manager at Crest Nicholson South West, said: “We’ve been working on new homes in the area for some time now and feel very much part of the local community. We’re delighted to have been able to contribute to the girls’ football teams in this way and to provide them with a kit which will see them training in style from now on.”

Martin Lee, Coach and BSYFC Football Community Officer, added “The girls were very excited to get their new kit. They look very professional and feel even more united now they’re all training in the same gear. We can’t thank Crest Nicholson enough!”

Bradley Stoke Youth FC (BSYFC) first started developing female football with the Gloucestershire FA in 2006. There are now 87 girls playing football at the club covering six different age groups and all of the teams participate in the Bristol Girls League (BGL) on a Sunday.

BSYFC welcomes new joiners and encourages girls to develop both their football and social skills in a nurturing environment which is based on fun and friendship. The club was awarded the FA Charter Standard Community Status in 2010 and has since won the GFA Community Club Award in 2011 and 2013.   It is hoped that members of the BSYFC girls teams will move into a Women’s Team at the club in the future.

Any girls wishing to join BSYFC or find out more information can contact Martin Lee on 07785 384618 or email mlee1@btopenworld.com Back
Our Business
Careers
Press Room
Sustainability
Charitable Giving
Community Engagement
We use cookies
This website utilises cookies in order to provide analysis of our visitor data, to improve our website, show personalised content and to give you the best experience. For more information, click here.
Accept