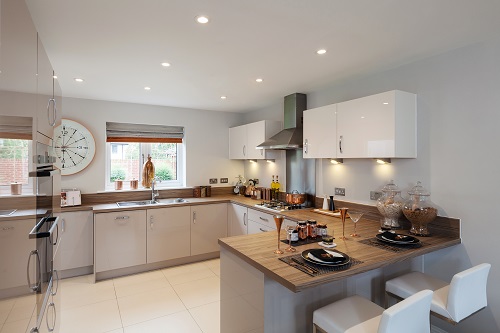 Award-winning developer Crest Nicholson has announced the release of new three and four-bedroom homes at Meadowside, Monksmoor Park, in Daventry. Meadowside has proved hugely popular since its launch last year, with many homes available on the government’s Help to Buy scheme. The new homes are ready for reservation now, and will be available to move in from early 2018.

Meadowside at Monksmoor Park is situated next to the Grand Union Canal, and offers far-reaching views over the open countryside.  It is conveniently located, with the M1 within close proximity to the development. Nearby Long Bucky station provides direct trains into London in an hour and 15 minutes, and Birmingham New Street in just 55 minutes.

Set within the picturesque county of Northamptonshire, and just a stones’ throw from the amenities of Daventry town centre, these traditional homes are the perfect choice for families looking for a balance between town and country living.

A three-bedroom house at Meadowside starts from £269,950, and is available on the Government’s Help to Buy scheme. To find out more about Meadowside at Monksmoor Park, call 01327 220079