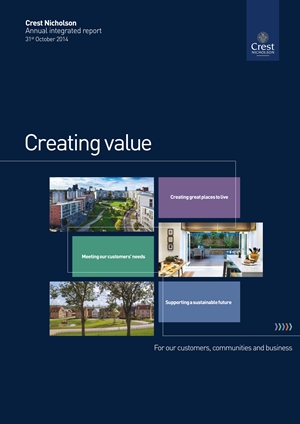 Developer Crest Nicholson today published its first ever Integrated Report. Titled ‘Creating Value’, the report covers the company’s performance for 2014 and future strategy across a range of financial, social and environmental indicators.

The company is among the very first in the UK property sector to adopt this form of triple bottom line reporting. Crest Nicholson has consistently embedded environmental and social factors alongside financial factors in its approach to business, and this move to integrated reporting is a natural step for the company. The report coincides with the company recently securing a place in the FTSE4Good Index, positioned within the 85th percentile for its ‘supersector’ and scoring particularly highly in the Corporate Governance, Climate Change and Water Use categories.

Integrated reporting uses a multiple bottom line approach that takes into account the company’s performance and productivity, as well as its commitment to customers, communities and the environment. This approach is of value to investors and stakeholders alike as it demonstrates how the business intends to create broader value in the short, medium and long term.

Commenting on the report, Stephen Stone, Chief Executive, said: “We’re excited to publish our new approach to reporting, which not only highlights the many achievements – from financial to social and environmental – seen at Crest Nicholson over the past year, but also reflects how the company thinks and does business. As a developer with sustainable practices at its core, Crest Nicholson is committed to the creation of communities and enabling sustainable lifestyles and this reporting approach allows us clearly to demonstrate both our progress and our long term plans. It is vital for companies to realise that there are issues other than the financial bottom line that affect the decision making of investors, stakeholders and indeed society as a whole.”

Highlights of the report

This is the first Crest Nicholson report to adhere to the International Integrated Reporting Council’s (IIRC) framework. Crest Nicholson remains a leader in its industry and among others as one of only a handful of UK companies publishing an integrated report.

The 2014 integrated report is available online at https://www.crestnicholson.com/investor-relations/reports-results-and-presentations.