About us > Press room > Crest Nicholson launches Hansford Park, a brand-new collection of homes in Houlton 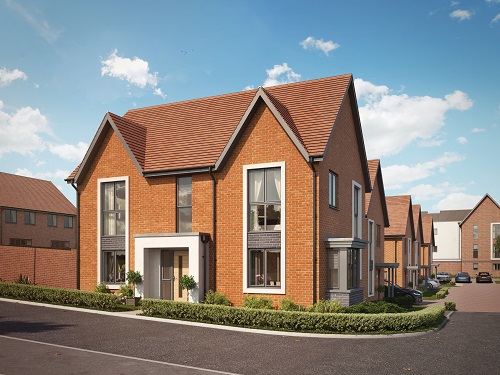 Award-winning developer Crest Nicholson has announced the launch of Hansford Park, the long-awaited collection of homes located on the site of the iconic Rugby Radio Station site in Houlton. The development is comprised of a collection of 186 homes, ranging in size from one to five bedrooms, and will launch on Saturday 20th January.

Crest Nicholson is one of three housebuilders contracted at Hansford Park. The new collection of homes at Hansford Park forms part of a new community, which will feature 6,200 homes, three schools, a health centre, community centre and 500 acres of open space for residents to enjoy on completion.

Hansford Park is within easy reach of the bustling market town of Rugby, which is home to an array of boutique shops, restaurants and bars for residents to explore. The town is also home to the Benn Hall, Rugby Theatre, and the annual Rugby Food and Drink festival - providing plenty of entertainment for residents. Families will also be well placed at the development with the arrival of three new schools, as well as, St Gabriel’s Church of England Academy in Houlton, which is set to open later on this year.

Situated just four miles from Rugby train station, Hansford Park is ideal for those travelling into both Birmingham and London, with regular direct trains into Birmingham New Street in 35 minutes and London Euston in 49 minutes. For those travelling by road, the M1, M6 and M45 are all easily accessible, linking residents to larger towns of Leicester and Milton Keynes.

The name Hansford Park reflects the rich heritage of the site, which was the former ‘mast-site’. Home to 12 820ft masts, it helped pioneer global communications in the 1920s.

Amanda Benjamin, Sales and Marketing Director at Crest Nicholson Midlands, said: “The launch of Hansford Park is a fantastic milestone for the development of the wider Houlton community, which will transform this iconic area of Rugby.

“There is undoubtedly a huge demand for new homes in Rugby, and at Hansford Park we are developing a range of properties to suit all types of home buyers. We are pleased to be working alongside our partners to deliver a modern, fit-for-purpose development, and look forward to watching this community flourish further over the coming months.”