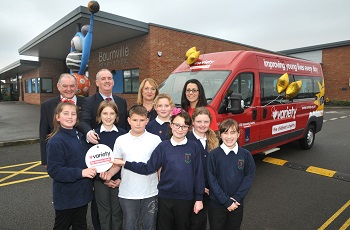 Award-winning developer, Crest Nicholson, has raised over £39,000 for Variety, the Children’s Charity, to fund the delivery of a much-needed Sunshine Coach for XTND at Bournville Primary School in Weston Super Mare.

Crest Nicholson raised the money at a charity event held at The Grande Pier in Weston Super Mare earlier this year. The aim of the event was to raise £27,500 to fund one Sunshine Coach in the local area. However, the generous attendees at the event, exceeded expectations raising over £39,000 which will fund the  coach as well as other equipment for children in the region.

Crest Nicholson has a long-standing relationship with Variety, having worked with the charity since 2005. Over the last ten years fund-raising activities organised by Crest Nicholson have now secured £700,000 to fund 19 Variety Sunshine Coaches at schools across the country, the coach for Bournville Primary School being the most recent.

The coach will be used to take the children to outdoor learning activities both in term time and during holidays.

Variety, the children’s charity, provides practical, tangible help to children who have to cope with sickness, disability or disadvantage, and their families, across the UK. The charity’s Sunshine Coaches transport thousands of young people across the UK every day; most are used by schools or organisations for children with special needs, transporting them to and from educational, recreational or vocational activities.

Tom Dwyer, Managing Director of Crest Nicholson’s South West division, said: “We’re thrilled to have been able to raise so much money for such a worthwhile cause and fully support the work Variety does across the South West and the whole of the UK. As responsible housebuilders we recognise the importance of getting involved with and supporting the local communities where we build and develop.”

Mike Haszko, Head of Corporate Fundraising at Variety, commented: “Crest Nicholson have been very long standing supporters of Variety, whose commitment to our work over many years, has immeasurably improved the lives of thousands of children. We simply can’t thank them enough”

Lynn Winter, XTND Development Manager for Bournville Primary School, added: ”We are delighted to receive our new minibus made possible with the contributions from Crest Nicholson and Variety. Having the bus means that XTND can take children to a range of environmental locations as well as participate in inspiring activities away from the estate thus building self-confidence, strengthening relationships and raising aspirations.”

Over the years, Crest Nicholson has organised charity events, from London to Paris bike rides to Mountain Treks. As well as the Sunshine Coaches, money raised has been used to fund smaller projects that make a big difference such as therapeutic play equipment and helping with house adaptations.