About us > Press room > China calling 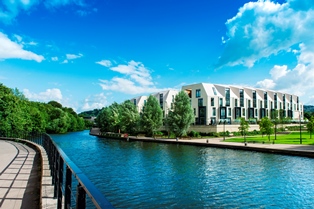 The visit by Chinese president Xi Jinping this week to the UK has cemented further the growing relationship between the UK and China. And although a lot of the official hand shaking is London-based, the impact of Chinese interest in other parts of the UK, including Bath, can be clearly felt.


Evidence of this attention has been experienced at the city’s premier property development, Crest Nicholson’s Bath Riverside, where a growing number of sales have come from the Chinese community.

Influenced by the city’s history, the opportunity to buy something new has clearly appealed to those either living in China or who have some form of link with the world heritage city.

This includes the increasing number of Chinese students who have earmarked Bath University in particular, and one of the country’s leading academic institutions, as their university of choice.

It’s resulted in an influx of enquiries from the Far East and is why the team at the waterside development has increased its activity with the Chinese market.

Recognising the importance of developing closer links with the Chinese community, Crest Nicholson recently became members of the Bristol & West of England China Bureau, an organisation that sets out to build trade relationships between the region and its counterpart in China.

A team from Bath Riverside also visited Hong Kong in the summer where they presented details on the development to prospective house hunters looking to either buy as an investment or to even put down their roots.

With a number of properties being reserved during the visit clearly indicates an appetite from the Chinese to buy property in Bath.

Susan Young, sales and marketing director at Crest Nicholson said: “It’s clear that the city of Bath is on the radar from those in China. The chance to buy a property in the world heritage city has clearly appealed.

“Our visit to Hong Kong was very interesting and the attention from those who came to see us highlighted that Bath is well regarded by the Chinese.

“There were varying points of interest from those who made enquiries such as the direct link to London on the train, the development’s proximity to the city-centre and the style and range of properties on offer.

“The influence of Bath University also attracted potential buyers who have bought or are looking for a property where their son or daughter will live during the term of their studies.

“For those looking to invest, the chance to receive yields up to 6% plus potential capital growth was an influencing factor in buying and will continue to do so into the future.

“We will now look to continue our relationship with the Bristol & West of England China Bureau and explore other opportunities with the Chinese community while maintaining Bath’s appeal from those living abroad.”

Dianne Francombe, Chief Executive of the Bristol & West of England China Bureau added: “Developing relationships with the Chinese community here and abroad take many years, so it’s great to see that the hard work is now paying off for the benefit of all.

“It’s also fantastic that Crest Nicholson has come on board as a member of the Bristol & West of England China Bureau and we are looking forward to working closely with the team so that our members and Crest makes the most of this new bond in Chinese, UK relations.”