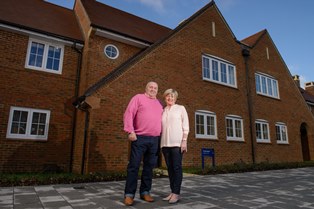 Buying a new build home can often put off older buyers – but one couple have told of their joy after moving into their dream property just a month after putting their old house on the market.

Diane and Alan Jopp, from Mitcham, Surrey, were initially uncertain about purchasing a new build property, after deciding to move closer to their grandchildren in West Sussex.

Yet after visiting award-winning developer Crest Nicholson’s Kilnwood Vale development, in Faygate near Crawley, Diane said their minds were soon changed after learning how hassle-free the process could be.

“We weren’t completely set on a new build to start with, but the process was just so quick and easy,” she said.

“We sold our house in April and moved into our new one in May. Moving house is usually such a stressful process, but buying a new build meant it was all done and dusted in a matter of weeks.”

Another of the biggest plus-points was that the house was ready for them to move into, with a fully-fitted kitchen, carpets and garden completely finished to an incredibly high standard.

Diane added: “We didn’t want to have to do work on the property which was lovely. Our kitchen is much bigger now; we also have an en-suite bathroom and three nicely sized bedrooms. A few friends have visited and commented that they love the house – we definitely made the right move!”

The development caught Diane’s eye after their daughter Lucie brought it to their attention, knowing it would be perfect for them to be near to grandchildren Gemma, ten, and six year old Ruby.

Diane explained: “It was always our plan to move closer to our daughter and grandchildren once I retired. We were originally looking for a place where they live in Maidenbower, but nothing felt right.

“Then one day my daughter emailed me the link for the Kilnwood Vale development on Crest Nicholson’s website. It was a Tuesday and we made arrangements to view the site that Saturday. We travelled down and the deal was done on the day. We were amazed!”

Diane and Alan are now looking forward to having the family over to stay – and getting everyone together this Christmas.

She added: “At ten and six they’re growing up so quickly. I now get the task of looking after them every Friday and there’s never a dull moment!”

On completion, the development will comprise 2,500 homes, delivering much needed housing for the growing population in the Gatwick triangle. Comprising a selection of two-bedroom apartments and two, three, four and five-bedroom houses, Kilnwood Vale has been designed to integrate seamlessly into the local community thanks to its robust infrastructure.