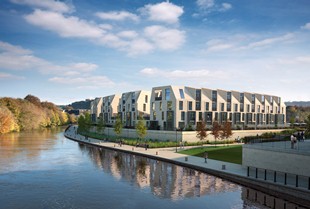 A slowdown in the London property market is benefitting the provinces.

It’s resulted in places like the world heritage city of Bath which, being about an hour and half from London by rail, is enjoying a bit of a boom, especially as buyers not only look to cash in on the equity gained on their London homes, but somewhere that offers good value for money and a slightly more flexible lifestyle.

It’s not just hearsay that is fuelling this interest but actual figures which show a rising trend of interest from the capital. According to the Bath office of Knight Frank, in 2013 there was a 13 percent rise in buyers from London rising to 22 percent in 2014.

This trend is already continuing in 2015, and makes the city, famed for its Roman baths a bit of a hot spot.

Part of Bath’s appeal is its Regency-styled period properties which has always attracted a plethora of those wanting to experience what is arguably the best example of Georgian architecture anywhere in the UK.

The honey-hued Ashlar stone properties, which stretch out from the city-centre towards the rolling Somerset countryside, have acted as a magnet for house hunters for many years while the famous Royal Crescent and Roman Baths add an historic charm to the world heritage city.

More recently, a major project by Crest Nicholson Regeneration has started to transform the site of the famous Stothert & Pitt, Engineers and Founders in the centre of the city and is offering a modern twist on the Regency theme.

Described as being the most important project the world heritage city has seen for more than a century, the development is also located within walking distance to Royal Victoria Park, Queen Square and Royal York Crescent.

Susan Young sales and marketing director at Crest Nicholson said: “We’ve seen a distinct rise in the level of enquiries coming from London and this is backed by the data from Knight Frank.

“Property prices over the last few years in the capital rose rapidly but with a slowdown in the market home owners are now looking to cash in. Bath and Bath Riverside are definitely on the radar for those looking for great value for money, a superb lifestyle and locations which enjoy direct rail links to the capital.”

Built using the distinct Bath stone, the aesthetics of the development blend with the more traditional buildings synonymous with the world heritage city.

With private courtyards, landscaped seating areas and contemporary design the development has already won a handful of national awards for its design.

The centre of Bath is a pleasant 10 minute walk away along the car-free tow path with the train station providing easy access to London. And once the electrification of the Great Western rail line is complete in 2017, travel time from Bath to London will be reduced further.

Current availability at the development includes a series of three and four-bedroom townhouses.

The first can be found on the exclusive phase called Albert Crescent. Epitomising why Bath is celebrated across the world for its luxurious living, these properties enhance the city’s reputation for having some of the most striking and sought after places to live in the UK.

Situated in a prime location directly on the south bank of the River Avon, the properties also benefit from stunning views of the water. Designed by renowned architect Alison Brooks, the internal specification sets them apart from anything that has been built in the city before.

They also provide the development with its own distinctive style and elegance and a more modern twist on the city’s Regency past.

The second range of townhouses form part of the Townhouse Collection which comprises a series of four and three-bedroom properties currently on Stothert Avenue and Longmead Terrace.

Anything but traditional in terms of their layout, they should appeal to those wanting to live in a Regency-styled home, but with the advantage of having a much more contemporary and considerate design.

Susan added: “What is key here is that house hunters need to dispel the traditional notion of a typical townhouse layout. Seeing, in this case, really is believing and the design of the properties on Albert Crescent, Stothert Avenue and Longmead Terrace mean owners will enjoy and benefit from some of the best flexible living space available in the region.”

For further information please call 01225 463 517 or visit www.crestnicholson.com/bathriverside  Back
Our Business
Careers
Press Room
Sustainability
Charitable Giving
Community Engagement
We use cookies
This website utilises cookies in order to provide analysis of our visitor data, to improve our website, show personalised content and to give you the best experience. For more information, click here.
Accept