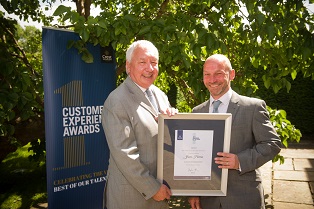 Bath employee Jamie Hurren has been recognised at the National House Building Council’s ‘Pride in the Job’ Awards 2017 for his work as a Project Manager on the Royal View phase of Crest Nicholson’s Bath Riverside.

Now in its 37th year, the NHBC’s Pride in the Job awards celebrates the exceptional contribution site managers make in creating homes of outstanding quality.

More than 16,000 site managers compete for the awards and the NHBC say this year’s winners were handpicked for their “excellent standards on site” and were named following 12 months of rigorous judging.

Having won a Quality Award, Jamie will now go on to compete for the Seal of Excellence awards, followed by the regional awards, with the top two finalists going on to the final stage, ‘the Supreme awards.’

On receiving the award Jamie said: “I’m delighted to win a Pride in the Job award. It’s great to be recognised by the National House Building Council and I have my fingers crossed for the Seal of Excellence award during the next stage of the competition.”

Marcus Evans, the Sales and Marketing Director at Crest Nicholson’s Regeneration Division - which oversees the housebuilder’s Bath Riverside development -  said: “Jamie thoroughly deserves his Pride in the Job award. He has made an outstanding contribution and we are incredibly proud of him.”
“The whole Regen team is delighted for Jamie and wish him the best of luck in the next rounds of competition.”

The award follows another triumph for Jamie, as he was named Site Manager of the Year at the Prestigious Crest Nicholson Customer Experience Awards. The awards, now in their 25th year, recognise excellence across the Crest Nicholson group.

Jamie has been instrumental in the development of the Royal View phase of Bath Riverside, which opened a brand-new two-bed show apartment in June featuring stunning views out across the city.

Providing potential buyers with a fantastic idea on the layout, aspect and specification of the properties on offer, those interested in viewing the new show apartment will need to contact the Crest Nicholson sales team to make an appointment.

For more information please visit: https://www.crestnicholson.com/developments/bath-riverside/ or call the sales team direct on 01225463517.