Atrium provides spectacular entrance never seen before in the West 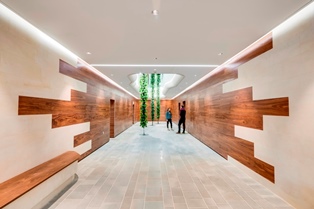 The most stunning internal feature ever included in a new property development in the West Country has proved a huge success with those fortunate enough to have moved into one of the brand new apartments in which it acts as the communal heart.

Unlike anything that’s ever been seen before – arguably outside of London – the central atrium that greets residents and their guests as they enter (or leave) Royal View at Bath Riverside has not only captured people’s imagination but has added a huge ‘wow’ factor to the Bath property scene.

The idea behind the atrium is so it connects residents with the outside elements, providing a direct link with the sky above while drawing in natural light.

Stretching from the ground floor all the way up the eight stories of the building, it includes columns of greenery that mirrors the organic surroundings of the building.

Inspiring residents to change the way they live their lives, it has already encouraged many to enjoy the open spaces, parks and boulevards that surrounds the development.

Marcus Evans, sales and marketing director at Crest Nicholson said: “The central atrium really has taken the breath away from prospective buyers who just love the columns of draped greenery.

“Features like this are not just the preserve of the capital and it’s so nice to see people’s reactions when they step inside the atrium for the first time. It also demonstrates and is indicative of the level of thought and high-end spec of all the buildings that have been built here at Bath Riverside.

“It’s the sort of feature that you will never get tired of.”

Such has been the success of Royal View, its sister building, Sovereign Point – which was launched in February – also includes a central atrium. With six properties being sold within an hour of its launch, seems to indicate that the appetite for high-end, new properties is strong in the world heritage city.

Marcus added: “There are a few properties left in Royal View plus a selection of two-bedroom apartments in Sovereign Point.

“Those wanting to live somewhere that has a real sense of having something different should make an appointment to take a look around. If they haven’t been here before they will not be disappointed with what is a superb example of inner-city regeneration and architecture.”

For further information please call 01225 463517 or visit www.bathriverside.co.uk Back
Our Business
Careers
Press Room
Sustainability
Charitable Giving
Community Engagement
We use cookies
This website utilises cookies in order to provide analysis of our visitor data, to improve our website, show personalised content and to give you the best experience. For more information, click here.
Accept