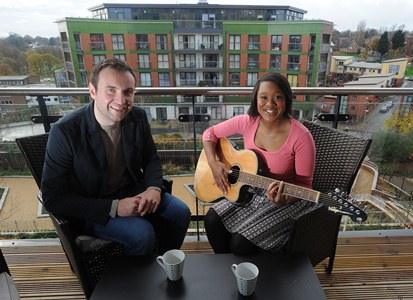 Most popular amongst first time buyers, five per cent deposit schemes such as Help to Buy have largely been credited with re-igniting the property market.

One such first time buyer who used a five per cent deposit scheme to purchase a one bedroom apartment at Park Central is Chris Bayliss, aged 27. Having previously rented for two years, Chris moved back into his parent’s home to save money for a deposit and then took the plunge and stepped onto the property ladder this summer.

“The whole house-buying process was quick and easy and, thanks to the savings I made on my deposit, I also had some money left over which meant I could really personalise the apartment with my own furniture and décor. The Park Central team was great as well, going well beyond their role and recommending local blind suppliers and the best places to go out for dinner.

“The location of Park Central is ideal for me as working in corporate sales means I need to travel by motorway every day. My apartment also came with a parking space included which is really unusual in the city centre.

“I’d certainly recommend using the five per cent deposit schemes to other people after all, without it I wouldn’t have been able to get onto the property ladder.”

A favourite amongst first time buyers and young professionals in Birmingham city centre, Park Central is located off Lee Bank Middleway, just five minutes from the bars and restaurants at Brindleyplace. The business quarter is situated less than a 30 minute walk away and New Street Railway Station is just a 15 minute walk.

Following strong sales last year, a brand new phase of homes has been released at Park Central. Named Madison Walk, the phase is made up of three bedroom freehold houses and one and two bedroom apartments, all of which have been designed with modern fixtures and fittings, as well as contemporary Symphony kitchens and contemporary bathrooms boasting Hansgrohe technology. Prices for the one and two bedroom apartments start from just £122,500.

For more information about the new homes at Park Central contact the sales team on 0121 666 4666 or visit the marketing suite which is open daily from 10am to 5pm and is located at 61 Mason Way, Birmingham B15 2GE. Alternatively, for more information visit www.parkcentral.co.uk