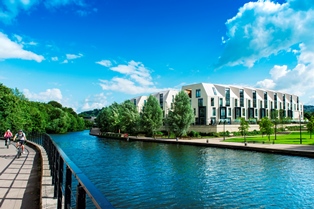 A new phase of family homes at Crest Nicholson’s Bath Riverside is expected to attract interest from parents affected by the latest secondary school place crisis in London.

Having received considerable attention from prospective buyers located in the capital and the Home Counties since it was launched, the latest release of stunning riverside townhouses is set to prove particularly popular with families and especially those with children approaching secondary school age.

Mary Timlin, sales and marketing director at Crest Nicholson said the recent announcement of state secondary school place allocations was also likely to prompt some families to move to Bath from London after their children did not receive places at the schools they wanted them to attend.

She explained: “Nearly all families in Bath succeeded in getting their children into their preferred school with 95 per cent being allocated their first choice.

“In 2015, 94.9 per cent of children in the area received an offer to study at their number one choice school.

“Bath Riverside has already attracted attention from those looking to move out of London but still enjoy the benefits of city living, and we anticipate disappointment over secondary school allocation in London will be the catalyst for some families to consider the options available to them in Bath.

“Not only is there better availability of state school places in Bath but moving from London could provide some families with an opportunity to release property equity which they could use towards fees for one of the highly rated private schools in the city.”

The situation of school places has been particularly grave in London, where schools are trying to make arrangements following a 3.3% increase in demand for school places this year alone.

Mary added that many of the townhouses on Percy Terrace at Bath Riverside are ideal for families, especially those with secondary school aged children.

She said: “If they can obtain a place in one of the Bath schools a family could move into one of these new homes in the centre of Bath over the summer holidays and be ready for the start of the new school term in September 2016.

“Also those worried about the 2017 allocation should consider now what their next move should be in order to secure a place at their preferred school.

“Bath Riverside is close to numerous primary and secondary schools. It is also just a short walk from Bath’s bustling city-centre along the pedestrian tow path. Those wanting to catch a train further afield can also walk to the station in about 15 minutes.”

For further information on family homes at Bath Riverside call 01225 463 517 or visit www.crestnicholson.com/bathriverside Back
Our Business
Careers
Press Room
Sustainability
Charitable Giving
Community Engagement
We use cookies
This website utilises cookies in order to provide analysis of our visitor data, to improve our website, show personalised content and to give you the best experience. For more information, click here.
Accept