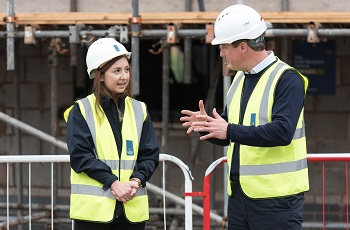 On the final day of campaigning ahead of the EU Referendum, Prime Minister David Cameron has visited Crest Nicholson’s Tadpole Garden Village development in Wiltshire to argue the importance of remaining in the EU to ensure a stable housing market in the UK. Mr Cameron was accompanied by Minister of State for Housing and MP for Great Yarmouth, Brandon Lewis.

Crest Nicholson CEO Stephen Stone and Tadpole Garden Village Project Manager Alan Blandford greeted the ministers following their arrival on the Remain campaign’s ‘Stronger in Europe’ bus. The ministers then enjoyed a tour of the development and were introduced to Crest Nicholson’s South West Managing Director Tom Dwyer and decorating apprentice Maisie Lapham, both of whom then joined the ministers aboard the ‘Stronger in Europe’ bus as it continued its journey.

Brandon Lewis MP commented, “The job of politicians is to do everything we can to help people get on in life – to buy that first home, providing stability and a place to raise a family.

“Crest Nicholson's development here in Wiltshire is a fantastic example of the homes we're working together to build and the investment that would be put at risk if we leave the EU.  Families are better off in Europe, and they can’t afford a vote to leave.”

Stephen Stone, CEO of Crest Nicholson, commented, “Government support has brought much needed stability to the housing market. The industry has responded by growing volumes and creating many highly-skilled jobs, apprenticeships and new career opportunities for young people. Homebuyers have confidence of future employment and easy access to mortgages, which helps them come to the decision to buy a new home. This is the housing environment today and anything which undermines it - including Brexit - would not be welcomed and could force us to revisit our investment decisions."

Tadpole Garden Village is a greenfield highly-sustainable development set in a 179-hectare rural location on the outskirts of the Swindon village of Blunsdon St. Andrew. It will eventually provide 1,695 two, three, four and five bedroom homes and a local centre, public house, primary school and a range of community buildings. It is one of the only developments in the UK delivering on the basis of Garden Village Principles. The introduction of a Community Interest Company (CIC), which puts decision-making power in the hands of the Tadpole Garden Village residents, was recognised in the National Housebuilder Awards 2015 for “Best Community Initiative”.