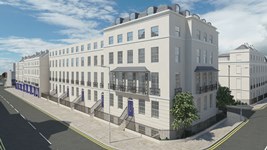 The regeneration of Cheltenham’s crumbling Odeon site has taken a major step forward.

The company has teamed up with developers Leckhampton Estates Ltd, which was granted outline planning permission by Cheltenham Borough Council in July 2013 for a residential-led, mixed-use scheme to bring 13 shops and 96 new homes to the heart of the Regency spa town.

Its Gloucester Place development will see the reinvigoration of a high-profile area of the town which has been derelict for eight years.

Working with Leckhampton Estates, Crest Nicholson plans to deliver 13 retail units, in addition to an impressive gated community of 58 apartments and 38 houses. The high quality homes will range from one-bedroom apartments to four-bedroom town houses, all of which have been sympathetically designed to be in-keeping with the surrounding Regency architecture.

Ben Miller, Development Director at Crest Nicholson South West, said: “We are absolutely thrilled to once again be building new homes for the people of Cheltenham. Gloucester Place follows hot on the heels of our highly sought-after Cheltenham Grange development in Badgeworth and presents a wonderful opportunity for us to give this prominent location in the centre of the town the new lease of life it so greatly deserves.”

A spokesman for Leckhampton Estates Ltd welcomed Crest to the regeneration project. “Our aim was always to come up with a scheme which would inject new life into a neglected area of Cheltenham and create a development to be proud of. We know that Crest Nicholson will do an excellent job of bringing that vision to fruition,” he said.

The council’s aim for the Odeon and Haines & Strange sites was to create a vibrant corridor linking the High Street with the new development of North Place and Portland Street where a Morrison’s supermarket is being built.

The Odeon, built in 1933, has been derelict since it closed in 2006. Haines & Strange Vauxhall dealers vacated their premises in Gloucester Place in 2008. Back
Our Business
Careers
Press Room
Sustainability
Charitable Giving
Community Engagement
We use cookies
This website utilises cookies in order to provide analysis of our visitor data, to improve our website, show personalised content and to give you the best experience. For more information, click here.
Accept