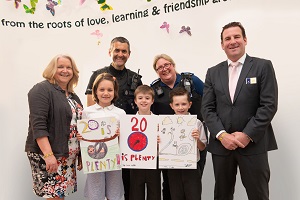 Pupils from Tadpole Farm CE Primary Academy have created a powerful and creative reminder for motorists to slow down to 20mph when driving in Crest Nicholson’s Tadpole Garden Village.

The schoolchildren took part in a ’20 is Plenty’ competition to design 20mph speed limit signs for Tadpole Garden Village, with three of the winning designs now featured on road signs at key locations across the site. The installation of the ’20 is Plenty’ road signs coincides with Living Street’s annual ‘Walk to School Week’, which has been sponsored by Crest Nicholson.

The winners were announced at a launch event at the Tadpole Farm CE Primary Academy. The event was attended by Andrew Dobson, Managing Director of Crest Nicholson’s Strategic Projects division as well as Inspector Andrew Bridge and PCSO Emma Harriman from Wiltshire Police, who gave a presentation about road safety.

The three winners, Rheya, Charlie and Lucas, received tickets to Cotswold Wildlife Park donated by Crest Nicholson and all the schoolchildren received ’20 is Plenty’ wristbands. Crest Nicholson also donated two commemorative brochures to the school, which feature a collection of the drawings submitted to the competition.


In addition to the new safety signs designed by children, Crest Nicholson has introduced digital speed signs on through routes at Tadpole Garden Village. New road safety posters have also been put up at the five construction compounds at the development and ’20 is Plenty’ wristbands have been handed out to construction workers to encourage everyone using the roads at Tadpole Garden Village to slow down.

Andrew Dobson Managing Director of Crest Nicholson’s Strategic Projects division, commented: “The ’20 is Plenty’ campaign at Tadpole Garden Village plays a vital role in promoting lower speeds throughout the development. I have been really impressed with the creativity of the designs that I have seen by the students at Tadpole Farm CE and was proud to see so many pupils take part and engage with road safety within the community.”

Jane Leo, Principal of Tadpole Farm CE Primary Academy, said: “The campaign has been a good way to get children engaged with road safety and everyone has been very excited to see the new signs erected on site. It’s inspiring for children to see their artwork come to life and help create an environment at Tadpole Garden Village we can all be proud of.”

To celebrate safer roads at Tadpole Garden Village, Crest Nicholson has also sponsored a campaign to promote the benefits of walking to school. Living Streets’ annual ‘Walk to School Week’ runs from 21 – 25 May and promotes everyday walking for children. Pupils at Tadpole Farm CE Primary Academy participated in this year’s campaign thanks to a donation of resource packs by Crest Nicholson.


Tadpole Garden Village will comprise 1,855 homes on completion, as well as a new secondary school, a pub, shops and other community amenities. The development already features a new Town Park, allotments and a community common.
Back
Our Business
Careers
Press Room
Sustainability
Charitable Giving
Community Engagement
We use cookies
This website utilises cookies in order to provide analysis of our visitor data, to improve our website, show personalised content and to give you the best experience. For more information, click here.
Only allow necessary Accept all cookies