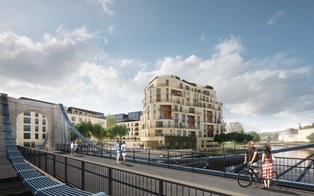 Bath’s leading new property development will end 2017 on a considerable high having won a major national award at the WhatHouse? Awards.

Regarded as being the biggest and most prestigious event for the country’s new home builders, Bath Riverside was presented a gold award in the Best Development category.

In addition, The Villas phase at the waterside development received a silver award in the Best Luxury Development category.

Hosted by comedian Jack Whitehall and former England rugby legend Lawrence Dallaglio, the team from Crest Nicholson were presented the awards at a glittering event held in the Grosvenor House Hotel in London.

It now takes the number of awards for Bath Riverside to 16, making it one of the most successful Crest Nicholson developments.

Judges were particularly impressed by the inherent elegance and softness of touch that has been achieved adding that its success owes much to the simple, clean lines of the buildings which is reinforced by the consistency in the building palette and use of Bath Stone.

Externally, judges said the landscaping that links the buildings and forms the new public and private relationship with the river is understated, saying it has been designed to create not one large space but a series of spaces, not only linking the buildings but also creating individual pockets where residents can sit.

In summary they said there is an attention to detail and quality which runs through all aspects of the development which is a credit to all of those who have been involved with conceiving and delivering the project which is set within one of the country’s most sensitive cities.

Marcus Evans, sales and marketing director at Crest Nicholson said: “It’s great to be recognised and to receive awards like this, especially from those within the industry.

“What’s more important is that Crest Nicholson is creating new homes and open spaces on land that had been left untouched for many decades.

“Bath Riverside is an excellent example of inner city regeneration and shows that with careful planning, commitment and passion anything can be achieved and we’re naturally delighted to be recognised for our efforts.

“Careful consideration to the design has been key to the development’s success and we’ve been conscious to ensure all the properties built reflect or have some resonance to Bath.

“Making sure the open space and public realm fits in with the development and city’s character has been just as important to the team as they provide an extension to the total living space.

“To provide an area with new homes that better reflects the need of the city is testament to the vision and determination of all those involved and we look forward to continuing the redevelopment of the area.

“2018 promises to be just as exciting with a number of new phases set to be launched and we’ll look forward to another successful year.” Back
Our Business
Careers
Press Room
Sustainability
Charitable Giving
Community Engagement
We use cookies
This website utilises cookies in order to provide analysis of our visitor data, to improve our website, show personalised content and to give you the best experience. For more information, click here.
Accept