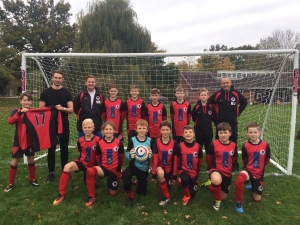 The Arborfield Aces are enjoying showing off their smart new kit after being sponsored for a second year by Crest Nicholson developers of the multimillion pound Arborfield Green development.

Crest Nicholson sponsored the kit this season after the club moved its home ground to Arborfield Green in the summer. The award winning developer also provided four new goals, footballs and the managers kit. Founded in 2014, the Arborfield Aces’ successful Under 12 team are now joined by an Under 8 squad – the Mini Aces.

The club’s new home ground is in the former Arborfield Garrison sports fields which are now managed by Crest Nicholson, who have opened the area up to the local community since taking over management of the facility from the Defence Infrastructure Organisation. Crowthorne Rugby Club have joined the Aces to have their temporary training ground on the old rugby pitches, along with a range of outdoor fitness classes.

One of the Under 12 players said:

"I love playing at our new home, I like it when people come and watch us and say come on Arborfield. I think Crest Nicholson really care about how we are doing and I like to do well to make them proud.”

“As a keen football fan myself, I was really pleased to support the Arborfield Aces in providing a great activity for young people in the local area. It is also very exciting to see Arborfield Green begin to thrive as we welcome the local community to make use of new and existing facilities in the development.”