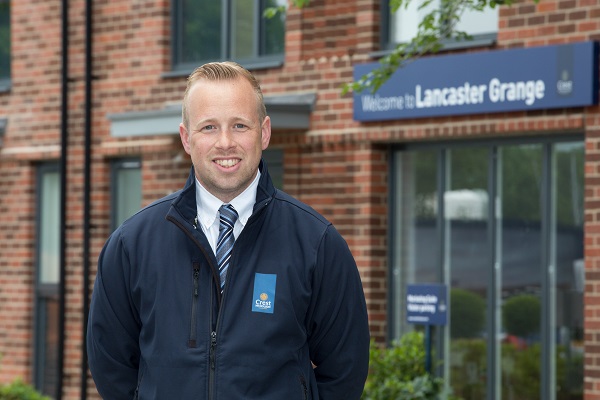 Paul Green, Senior Site Manager at Lancaster Grange in Bricket Wood, has been named regional winner at the prestigious Southern NHBC Pride in Job awards. These annual awards are designed to recognise the very best in the UK’s construction industry, and a Pride in Job award is the highest industry accolade a site manager can receive.

The winners were announced on Friday 26th October at the Hilton Brighton Metropole. Paul was one of just 3 Regional Award winners for the Southern region, taking the regional award for the Large Housebuilder category.

He overcame strong competition to achieve this accolade, with 16,500 individuals initially entering nationwide, out of which just 450 were granted the ‘Quality Award’, and only 150 went onto be presented with the ‘Seal of Excellence’ by the NHBC. Paul will now go onto the UK-wide event and will compete against other regional winners for the national award.

Paul has worked for Crest Nicholson since July 2017 and has been Senior Site Manager at Lancaster Grange for 12 months. Earlier this year, Paul won Bronze for ‘Site Manager of the Year’ at Crest Nicholson’s Customer Experience Awards, which celebrate excellence within the business.

Jon Cook, Managing Director at Crest Nicholson Chiltern, said: “We’re so proud of Paul’s achievement and this award is a testament to the hard work and dedication he applies to his role as Senior Site Manager each day. To win an NHBC Pride in the Job award is a huge accolade for any Site Manager and team, and to win a regional award is truly stunning.”

Prices at Crest Nicholson’s Lancaster Grange start from £384,000 for a two-bedroom apartment, and £545,000 for a three-bedroom house. To find out more, call 01923 595014 or visit www.crestnicholson.com/lancastergrange