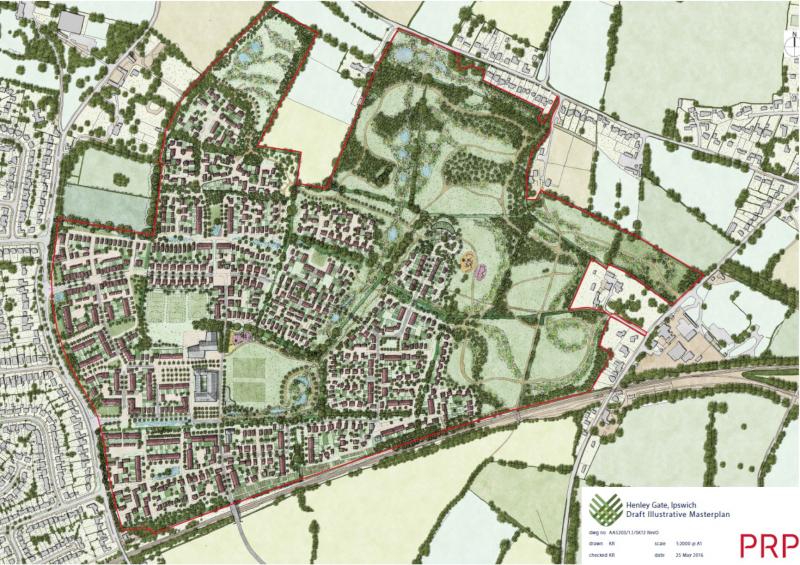 Award winning developer Crest Nicholson has received a resolution to grant planning permission for Henley Gate, a significant new mixed use development in Ipswich, which will form part of the Ipswich Garden Suburb.

Crest Nicholson’s proposal will deliver a new neighbourhood modelled on garden suburb principles providing 1,100 homes, a 30-hectare Country Park with a visitor centre, in addition to a local centre, a two-form entry primary school, sports pitches, and a community centre and retail units.

Construction of Henley Gate will provide 186 new full time jobs for the Ipswich area while the scheme is being delivered, on top of 130 additional indirect jobs during the build**. To support potential buyers to get their first step on the housing ladder, around 15% of the homes, expected to be 165 units, will be allocated as affordable housing and available on a joint equity scheme.

The Henley Gate scheme is supported by a draft allocation in Ipswich Borough’s Local Plan and is the first neighbourhood to receive a resolution to grant planning permission from the highly anticipated wider Ipswich Garden Suburb scheme, which will ultimately provide up to 3,500 new homes.

“We are thrilled to be able to move ahead with our plans to build a new neighbourhood for Ipswich. This application is the result of many years of consultation, and we thank all of the residents, stakeholders and the wider community who helped to shape the final plans.

“This scheme is an example of our commitment to creating communities which build a legacy for the future with a neighbourhood that will have a sense of community and a positive impact on quality of life for residents. We will continue to work closely with residents and the wider community as we put together a detailed application for Henley Gate. Our commitment was to create a community that Ipswich would be proud of and we look forward to delivering on that promise.”

Crest Nicholson will continue to work with both the Ipswich Borough and Suffolk County Council to finalise a Section 106 agreement and hope to be on site delivering infrastructure by the end of 2017.

* Using the LFT forecasts, construction of Henley Gate would generate an average of 186 jobs for the residential component over a 13-year construction phase