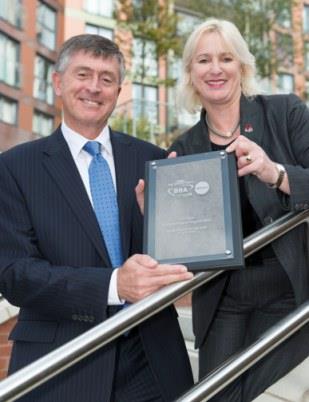 Crest Nicholson’s Park Central development in Birmingham city centre has been named Development of the Year (over 100 homes) at the Sunday Times British Homes Awards, beating a host of London-based developments.

In a triple celebration, Crest Nicholson was also named Homebuilder of the Year and its Firepool Lock development in Taunton won the award for Best Standard House Type.

Regarded as one of the top award ceremonies in the industry, the Sunday Times British Homes Awards aims to celebrate those developers that deliver the best residential schemes across the UK.

Debbie Aplin, Managing Director for Crest Nicholson Regeneration, said: “Winning this award is testament of just how much has been achieved over the past decade at Park Central.

“The latest phase, Central Plaza, demonstrates the company’s dedication to delivering high quality, desirable and well-designed homes that meet the needs of local people. We have received a huge deal of praise for the scheme locally and it is fantastic to see it recognised on a national level.”

The judges praised Crest Nicholson for the stand-out design of the two buildings that make up Central Plaza, both of which boast a unique chameleon effect cladding that change from green to bronze in the sunlight. The developer was also commended for the quality of build at Park Central and the team’s considerate approach to housebuilding – particularly with regards to the 1,000 plus residents already living at Park Central.

Park Central has been delivered by Crest Nicholson in partnership with Birmingham City Council and Optima Community Association.

Debbie said: “The success of Park Central is down to the excellent partnership working between Birmingham City Council, Optima and Crest Nicholson. Working together, we have been able to transform an area of Birmingham City Centre and create a place that people want to call home.”

The development is a 61 acre regeneration project, located off Lee Bank Middleway in Birmingham City Centre. Park Central has proven exceptionally popular this year, with all the apartments now sold. A brand new phase, Madison Walk, has been launched this month, made up of three bedroom freehold houses and one and two bedroom apartments. For more information visit www.parkcentral.co.uk or pop into the marketing suite, located at 61 Mason Way, Birmingham B15 2GE, which is open daily between 10am and 5pm. To make an appointment, call 0121 666 4666.